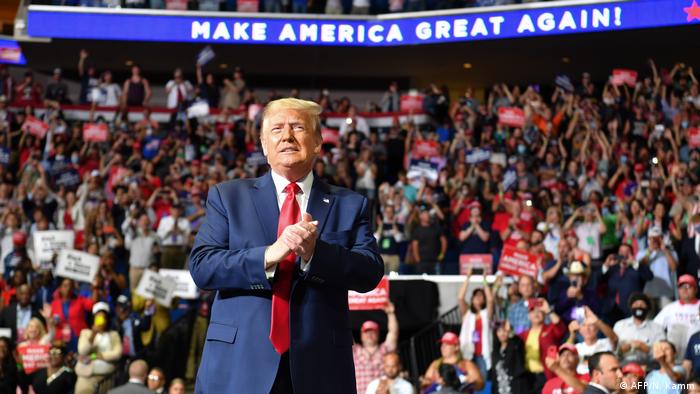 Bruce Springsteen vs. Ronald Reagan, Bobby McFerrin vs. George H.W. Bush, Sting vs. George W. Bush, Jackson Browne vs. John McCain. For decades, musicians have been taking legal action against political candidates, most of them conservative, for playing their music without permission during campaigns.

Read more: 'Hail to the Thief': Music in political campaigns

But since Donald Trump began campaigning in 2015 with flag-waving rallies that have since become a feature of his presidency, the populist politician has been issued with an unprecedented wave of cease-and-desist orders and legal suits from pop stars. They include Neil Young, R.E.M, The Rolling Stones, Adele, Rhianna, Pharrell Williams and Tom Petty, to name a few. But so far, their legal recourse has been limited.

Cananian-US musician Neil Young this week issued a copyright infringement suit against Donald Trump's re-election campaign for using the songs Rockin' in the Free World and Devil's Sidewalk at a controversial and sparsely attended rally at Tulsa, Oklahoma, on July 5.

Young's lawyers wrote in a complaint that the artist "in good conscience cannot allow his music to be used as a 'theme song' for a divisive, un-American campaign of ignorance and hate."

But Young's lawsuit seeking $150,000 in damages for each infringement is likely to fail.

Music copyright lawyer Dr. Christian Seyfert, based in Frankfurt am Main in Germany, says that the lawsuit "does not have a solid basis" since Young's music publishers are likely members of performing rights societies such as the American Society of Composers, Authors and Publishers (ASCAP) and Broadcast Music, Inc. (BMI), from whom "Donald J. Trump for President, Inc." acquired a performing rights license at campaigns.

"Neil Young and his music publishers as members would have transferred the economic rights regarding Neil Young’s music compositions to their performing rights society," he told DW.

But The Rolling Stones are working with BMI to close this loophole. When Trump's re-election campaign played the Stones classic You Can't Always Get What You Want at the Tulsa rally as the president left the stage, it seems to have been the last straw. Despite a cease-and-desist order from The Rolling Stones, the song has closed out numerous Trump rallies since 2016.

In an interview with Deadline, an entertainment website, BMI admitted that the Trump campaign has a "political entities license" that "authorizes the public performance of more than 15 million musical works in BMI’s repertoire wherever campaign events occur." But it added that there is a provision "that allows BMI to exclude musical works from the license if a songwriter or publisher objects to its use by a campaign." 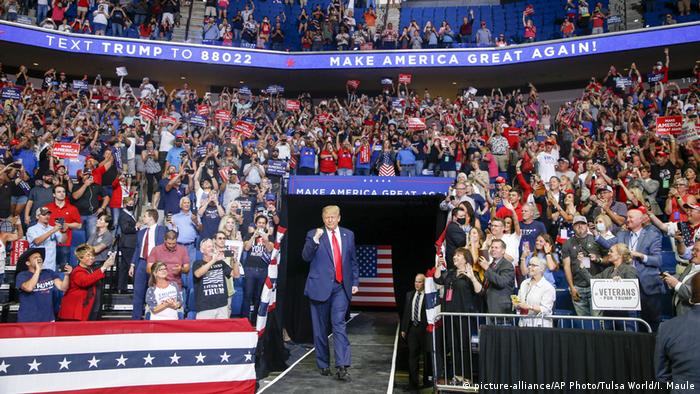 Pop music populism: Donald Trump riled up his campaign rally in Tulsa on June 20 using numerous songs by artists who had not given consent

Such an objection was made by the Rolling Stones, meaning that their works have been removed from the BMI campaign license. Any use of their music will now be a breach of its license agreement, though it is yet to be tested in the courts.

"Neil Young should do the same," said Seyfert. "He could say to his performing rights society that he will terminate his contract with them if they continue to license his song material to political campaigns."

The same advice could extend to Tom Petty's estate, which also issued a cease-and-desist order against Trump's campaign after Petty's song I Won't Back Down was played at the rally in Tulsa.

According to Connecticut-based attorney Greg Kanaan, the issue is not about copyright or licensing. Instead, it is a trademark issue that concerns an artist's brand.

"If the use of a song by a politician is likely to create confusion in the marketplace that the musician endorses the politician, especially if this association harms the musician’s reputation," musical artists could have recourse to a law governing trademark infringements known as The Lantham Act, wrote Kanaan in his blog in 2015.

At the time, the emerging Trump campaign was hit by a wave of cease-and-desist orders for unauthorized use of music, including from band R.E.M., whose hit It's the End of the World as We Know It was played at a rally in Washington D.C. "Do not use our music or my voice for your moronic charade of a campaign," wrote lead singer Michael Stipe in an email.

Musicians with avowed left-liberal leanings don't want their music associated with the far right, anti-immigrant populism of Donald Trump – or as Neil Young wrote, an "un-American campaign of ignorance and hate." Yet such a trademark infringement has almost never succeeded in a court because such political endorsement is difficult to quantify, Kanaan explained.

"Most people," he wrote, "don't assume REM supports Trump even when the songs play prominently during his rallies. We all know that musical taste is not determined by ones' political leanings; people just like the music they like."

But that didn't stop R.E.M bassist Mike Mills from tweeting in January that the band did not condone the Trump campaign, which continued to play its music without consent.

That month it was reported that Mills successfully lobbied Twitter CEO Jack Dorsey to take down a Donald Trump tweet in which a video of Democratic party members responding to the president's State of the Union address was played over the R.E.M song Everybody Hurts.

The difficulty in fighting the Trump campaign's unauthorized use of music was reflected in a public letter by The Artist Rights Alliance (ARA) "demanding politicians on both sides get clearance on the music they plug at their events and in advertisements."

The fact that pop celebrities like Mick Jagger, Keith Richards, Elton John, Steven Tyler, Sheryl Crow and Lionel Richie signed onto a letter calling for major political parties to "establish clear policies requiring campaigns to seek consent of featured recording artists, songwriters, and copyright owners before publicly using their music in a political or campaign setting" is an acknowledgement that there is little they can do legally.

The letter addressed to political campaigns by ARA simply requires that they #AskFirst.

K-pop's online fanbase gets political – unlike its stars

The legendary singer-songwriter has some dozen unreleased recordings that he plans to add to his new archival website. He has also graced the big screen as the "Man in the Black Hat" in a new film.

Hundreds of people sang "God Save the Queen" in front of Buckingham Palace on Thursday evening after the death of Queen Elizabeth II. What will happen to the song now? Five facts about the British national anthem.