Acclaimed American composer Elliott Carter came to Germany on a scholarship as a young man. Now, at 100, he encourages budding composers to follow their hearts. 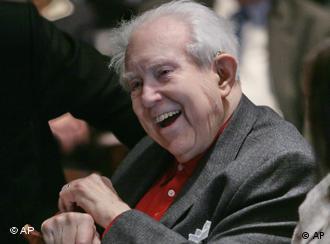 Composer Elliott Carter is internationally recognized as one of the leading American voices of the classical music tradition. One of the extraordinary features of Carter's career is his astonishing productivity and creative vitality as he embarks on his eleventh decade. He has written more than 130 works and over 40 of these in the past decade alone.

DW's Breandain O'Shea met with Carter during the Aldeburgh Music Festival in the UK, where a special program of his music was being presented to celebrate his 100th birthday.

Click on the audio link below to listen to the complete interview.

Deutsche Welle: Mr. Carter, you spent a period of your life in Germany - around 1964, when you wrote your much celebrated piano concerto. How did you come to Germany and how important has German music been in your career?

Elliott Carter: It was a time when the Ford Foundation and the Berliner Senate got to together to start what I think was called the Deutsche Austauschdienst (German Exchange Program) and they invited a number of artists - WH Orden was one, I can't remember the rest. You could stay there for a year. We had a very good and interesting time.

I'd had an interest in Germany since I was in college in 1920 and 1930. I use to go to Germany - Munich - hoping to learn German, but instead ended up going to Wagner and Mozart operas at the Prinzregententheater.

So I never really learned German. I was more interested in the music than the language. It is a country that I have greatly admired in many, many ways. After all, most of the music I am interested in is German. It has been an important part of my life.

Literature has had an incredible influence on you: Proust, James Joyce, Thomas Mann and the poetry of Elizabeth Bishop. You once said literature helped you discover important aspects of music that you didn't find in compositions. What do you mean by that?

Well, of course literature deals with the actual physical world and the world that we see. Music is an imaginary thing; in some ways it deals with what seems to be feelings and thoughts. Literature is much more concerned with how we think about the world around us, while music is much more "innerlich" (internal).

What advice would you give young composers today?

Young composers should always do what they love to do. If they love to make money, that's one way of writing music. And the other one is if they like to write notes.

Is there a difference?

Of course there is, because if you really want to make money then you have to write for a large public. If you write notes then you have to write what you think is good and hope that other people will like it. We are all composers that are a result of a good deal of training and that training consisted partly of understanding what audiences expect. And so as a result, the relationship of the composer to the audience is a built-in thing when you become a professional.

Then, of course, it doesn't mean that all the audience will like it.

Here we are all taught to write fugues - but then who in that audience will know what a fugue is? (Composing) is full of peculiar problems like that.

Carter's "Intermittences" for piano, written in 2005, tactfully parallels silence with sound. Listen to or download this recording by pianist Elena Bashkirova. (23.09.2008)

Ingo Metzmacher, principal conductor of the German Symphony Orchestra Berlin (DSO), says music is closely linked to the German soul. His aim is to translate music for his audiences. (13.01.2009)

Entering his final season as music director of the prestigious New York Philharmonic, Lorin Maazel told DW-WORLD.DE about the legacy he leaves behind with the orchestra and his plans to compose and found a new festival. (15.09.2008)