Mukwege: Prize for the women of DRC

The European Parliament has awarded Congolese doctor Denis Mukwege the Sakharov Prize for Freedom of Thought. The gynecologist helps the victims of rape in conflict zones. 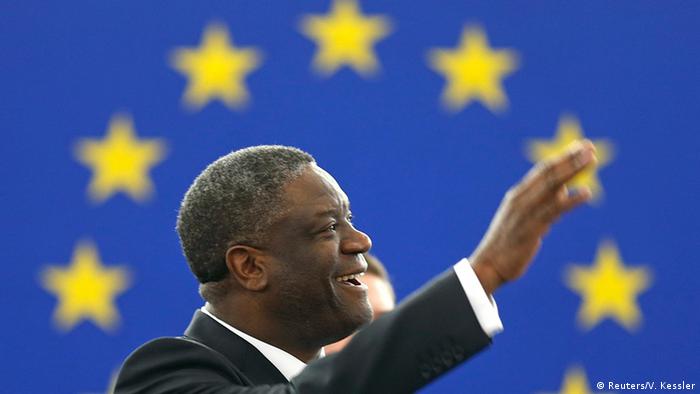 Denis Mukwege has helped thousands of rape victims in his country. Rival forces fighting in Democratic Republic of Congo (DRC) have used mass rape as a weapon against local civilian populations for decades.

Dr Mukwege is the founder of Panzi Hospital near Bukavu in DRC's south Kivu Province which has seen some of the worst violence. In an interview with DW, Mukwege said the traumatization of an entire society must end.

DW: Dr Mukwege, what does the Sakharov Prize mean to you?

We have a program at the Panzi Foundation that provides psychological counselling for women after they have received medical treatment in the Panzi Hospital. This makes it possible for them to work again. We want to create small units where the women can produce good quality items for sale. This will bring them a better income, which will make it possible for them to lead a more dignified life - they can pay for their children to go to school and take care of their own needs. This gives them a better standing within society which, in turn, increases their self-respect

Are women in South Kivu still suffering acts of violence?

I can say that such acts are occurring less frequently. But the form the violence takes has also changed and that is a cause of concern for us. In the town of Beni 50 people were brutally killed. I do not understand why peaceful people living in a village are killed in this way. How can such things happen? About six weeks ago there were more than 200 victims in Beni. We have to react to such incidents. In Bukavu, more children are being born because their mothers were raped. They were not killed but their genitals have been completely mutilated. That is a form of violence that aims to traumatize an entire society. If such a thing happens without any punishment being exacted, how can one talk of peace? I believe that in eastern Congo one can say there is no longer war but there is also no peace.

A year ago, in an interview with DW, you said you placed great hopes in the peace agreement for DRC signed in February 2013 in Addis Ababa. Do you still have these hopes?

I have not given up this hope since the agreement exists. US President Barack Obama said at the time that the agreement should not only exist on paper. But its implementation must be effective.

What do you think needs to be done in concrete terms?

There must be a reform of the security forces in DRC. They need to be reformed in such a way that they are able to protect the civilian population. That belongs to the duties of a state. But this duty can only be carried out if a state's army and police are suitably equipped. We now have the UN mission MONUSCO – but for how much longer? Mission head Martin Kobler is a courageous man but that is not enough. We cannot put a UN soldier behind every Congolese woman! The state has a responsibility. I also expect the presidents of neighboring countries to play a more active role in seeking solutions to the dramatic situation in the Great Lakes region. There is the peace agreement of Addis Ababa but many steps have not yet been implemented. Civil society and women's organizations should be involved in the monitoring of the agreement and its implementation.

Dr Denis Mukwege is a Congolese gynecologist who has worked for over 20 years to help rape victims in DRC.

A Congolese doctor who specializes in the treatment of rape victims has been presented the Sakharov Prize for his work. The award is one of Europe's most prestigious human rights accolades. (26.11.2014)

There is no respite for the UN blue helmets in eastern DRC. New militia groups are gaining in strength and attacking vulnerable civilians, who are angry at the UN's apparent inability to protect them. (06.11.2014)