Mugabe at 90 - dictator or freedom fighter?

Zimbabwean President Robert Mugabe turns 90 on Friday. In the West, he is perceived as a dictator, but in Africa he still has many supporters. 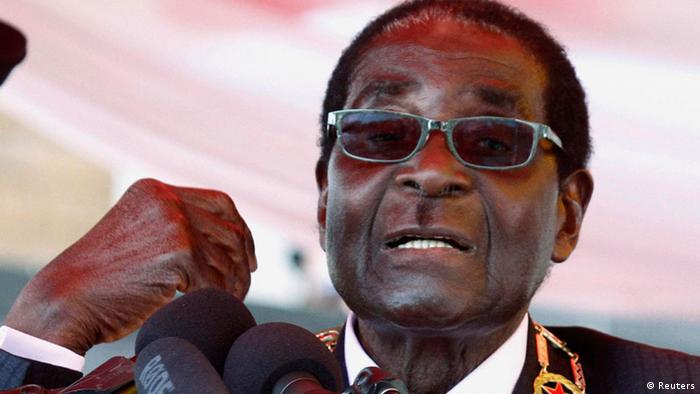 Robert Mugabe – a dictator! Baffour Ankomah, who knows the Zimbabwean president personally, thinks this absurd. "If you read the Western media, he eats the population for breakfast, lunch and dinner. If you meet him personally, you get quite a different impression," said the editor-in-chief of the London-based magazine New African. "His humanity is especially impressive;" he added.

Ankomah, a journalist from Ghana, and his magazine are great fans of Robert Mugabe. They believe that the Zimbabwean leader – against whom the EU and others have imposed sanctions on the grounds of severe human rights abuses – is a heroic freedom fighter.

In 2004, New African invited its readers to submit candidates for a list of the 100 most important Africans. Robert Mugabe came third, after Nelson Mandela and Kwame Nkrumah, the first president of Ghana.

Despite this accolade, birthday congratulations from the West are likely to be few and far between when Mugabe turns 90 on Friday (21.02.2014).

It was not always that way. Mugabe, who led his country into independence from Britain in 1980, was a respected figure in the West in the 1980s and 1990s. He was knighted by Queen Elizabeth and awarded honorary doctorates.

Victims not just rich and white

Nobody seemed to care at that time that Zimbabwean soldiers, acting on Miugabe's orders, had massacred supporters of his arch rival Joshua Nkomo.

It was only after Zimbabwean militia began occupying the estates of white farmers with Mugabe's approval that he acquired the reputation of being a dictator.

Mugabe's victims were not just rich white people. In 2005, his government targeted the slum population in Harare and other big cities. More than 50,000 houses were destroyed, 30,000 people were arrested and a million people were made homeless.

Critics believe it was a deliberate, punitive campaign – slum dwellers were reputed to sympathize with the opposition. Zimbabwean opposition leaders and trade unionists were arrested, triggering condemnation in the Western media.

Poverty became widespread and, for a time, Zimbabwe had the highest inflation rate in the world. More than 3,000 died in 2008 in a cholera epidemic because the health service had collapsed. 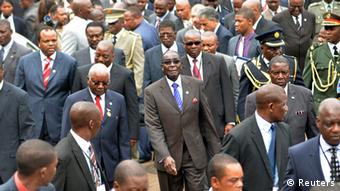 Mugabe nurtures his ties with other African leaders

Yet Mugabe's popularity in Africa remains undiminished. At the beginning of this year, African heads of state and government elected him first deputy chair of the African Union. If Robert Mugabe was not invited to the planned EU-Africa summit in April, then the meeting would be boycotted. "If Zimbabwe doesn't go, then neither does Africa," thundered Zambia's foreign minister Wylbur Simuusa within hearing distance of the European Union.

Do not desert a friend

Mugabe is popular with other African leaders because he is a consummate politician with good connections. As a guerrilla fighter against the white minority regime in what was then Rhodesia, he established links with numerous other African rebel movements. He was a close ally of South Africa's ANC, for a time he fled to Tanzania and Mozambique. Many comrades-in-arms from those days are now presidents and politicians and they still loyally support the dictator from Harare. 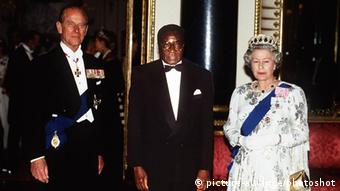 Queen Elizabeth, her husband Prince Philip, the Duke of Edinburgh, and Zimbabwean President Robert Mugabe at Buckingham Palace in 1994

Andrea Jeska is a German journalist specializing in Africa. She said that while doing research for a new book on Zimbabwe she asked the former Mozambican president Joaquim Chissano how he - as a committed democrat - could still remain friends with a man like Robert Mugabe. "He got very cross and said one doesn't desert a friend just because he has fallen on difficult times," she said.

Mugabe's anti-Western rhetoric goes down well with sections of the population in quite a few African countries. When he launches into tirades against Western dominance and calls on Africans to finally take control of their own countries and resources, then he strikes a chord with many people. Poverty and the unequal distribution of wealth from natural resources are still a reality decades after the end of colonial rule.

Baffour Ankomah said many people admire Mugabe because over the last twenty years he has given the land that the colonialists had appropriated back to its original owners.

Other countries have made little progress in this area. When Namibia became independent from South Africa in 1990, almost half of all the agricultural land belonged to 3,500 white famers. During the German colonial era and the period of South African occupation, black Namibians were unable to buy land. There is now a land reform program, but it is voluntary and only a few farmers have put their land up for sale.

Against this background, Mugabe's policies are likely to continue to appear attractive to many people for some time to come.

The EU's suspension of sanctions on top Zimbabwean officials, except Mugabe and his wife, met with an angry response from the ruling ZANU-PF party. The opposition says the Mugabe travel ban is "probably justified." (19.02.2014)

Current humanitarian crises in Africa, for example in South Sudan and Central African Republic, make it difficult for the World Food Program to tackle the long-term problem of hunger in Zimbabwe. (04.02.2014)

Although the deadline set by Zimbabwe's government for foreign retailers to close their shops has expired, they remain open for business. But it seems they are not yet off the hook. (30.01.2014)