Much Ado About Bush

President Bush's impending visit to the German city of Mainz is being heralded as a chance for Berlin and Washington to mend fences, but for many residents in the Rhineland city, it's just an unwanted inconvenience. 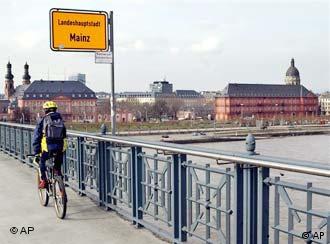 Even cycling in central Mainz will be a problem on Wednesday

In a statement released by the Mainz police authorities earlier this week, the president's upcoming visit was described as a "great challenge". But that is putting it mildly. In reality, the visit, which will last for just six hours, has triggered the largest-scale security operation the Rhineland-Palatinate police authorities have ever known.

Come next Wednesday, the weeks of US-German co-ordinated planning will be put into effect as highways and schools are closed, public transport is diverted and river and air traffic is suspended. In short, the city will grind to a temporary standstill as the security circus, which
involves thousands of police from all over the country, hogs the limelight. 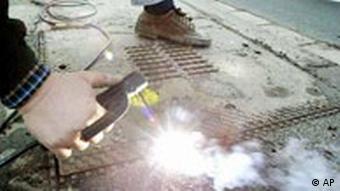 Not even the public drains are left open to chance

Reinhard Rothgerber, spokesman for the Trier police department has been drafted in to help stem the flood of press enquiries in Mainz. "It is not just a matter of having police officers there on the day, there is so much to be done beforehand, from dealing with the media to increasing the number of officers on the beat checking for potential problems ahead of the visit," Rothgerber said.

Bush is not the first high-profile American to cross the city limits. Indeed, he is following in the footsteps of both Bill Clinton and his own father, Bush Senior. So what, many citizens are asking, is all the fuss about? "George Bush is considered to be at serious risk of attack, and it is our job to make sure that nothing happens to him," Rothgerber said.

But the cost of such determination on the part of the German authorities is causing considerable consternation among the locals, almost all of whom will be affected in one way or another. Parts of the inner city will only be open to those who live there, although even they will have to show their ID cards to be allowed any kind of freedom of movement. 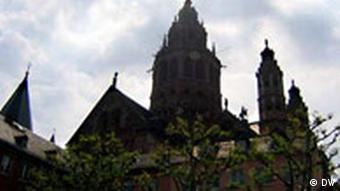 Worshippers will have to wait til nightfall to say their prayers

It will be a pain in the purse for many shop and restaurant owners in cordoned off areas. Although they can officially set about business as usual if their paperwork in order, the streets will be largely devoid of one crucial component: customers.

Many people have decided to take the day off, although they don't feel they should have to. That is also the stance taken by the service industry union, Verdi, which officially advised its members not to cash in any time in lieu for a day off in the name of the US presidential visit, but to simply warn their superiors of the delays and difficulties they are likely to encounter in getting to work.

The police have set up a hotline for residents who want to know how they can move about next Wednesday. It opened on Monday, and has been receiving between 3,000 and 3,500 calls daily.

Katrin Henrik lives in the city centre, but has to travel to get to her job just out of town. "It looks like I will have to take the day off because with the highways closed, there is no way to get there. It's ridiculous," she said.

This restriction of movement begs a valid question. "If the President has such massive security needs, then why choose a city like Mainz as his destination? Why not have him go to a more remote place, where fewer people would be affected?" Mainz citizen, Peter Zenke asked. 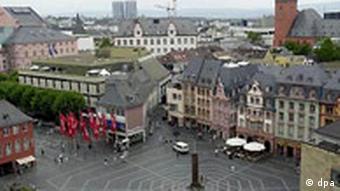 Protesters will get as close to the centre as they can

Why not indeed? The protest initiative "Not welcome, Mr Bush", which is planning a massive demonstration on Wednesday, says the official reason for selecting Mainz was that the US premier wanted a "cosy atmosphere" for his talks with Chancellor Schröder. But with between five and ten thousand protesters expected to gather in the Rhineland city on Wednesday, the organisers hope to shatter any such illusion.

Atzl has been in close contact with both the police and the city in the run up to next week's protest action. At one stage his initiative was offered the use of public buildings as overnight accommodation for protesters from far-flung places. But with just days to go, the offer was withdrawn without
reason.

"It's crazy because it would not only have helped us out by enabling demonstrators to arrive a day earlier, but would have eased the burden of traffic trying to get into the city on the actual day of the visit. I guess the mayor just doesn't want the protests," Atzl stated. The premiers are expected to meet at Electors Palace

Indeed the city is making quite something of the visit as a way of upping Mainz's profile on the world map.

"The upcoming visit is both an important event, and an opportunity for us to become an attractive economic and tourist location," said Mainz's deputy mayor, Norbert Schüler. "It is advertising for our city and it cannot be too highly valued."

That, Atzl believes, is as maybe, "but it's an absurd price to pay for a bit of publicity, and even worse for a visit in which the two premiers are not even likely to address the issues which matter."

Politics is about power and persuasion. Getting the mix right is part of any president's challenge, particularly if a second term is involved, comments Jackson Janes on President Bush's State of the Union address. (Feb. 04, 2005)

Mainz to Lock Down for Bush Visit

Tight security measures are being put into place for George W. Bush's stop in the city of Mainz next week during his European tour. Highways will be sealed off, schools closed, and river and air traffic suspended. (Feb. 16, 2005)

Condoleezza Rice flies out of Europe on Thursday evening after what can be seen as a successful tour. But with Bush on the horizon, can Europeans expect a real change in transatlantic relations? (Feb. 11, 2005)