Europe After Rice: Can Real Change be Expected? | News and current affairs from Germany and around the world | DW | 10.02.2005

Condoleezza Rice flies out of Europe on Thursday evening after what can be seen as a successful tour. But with Bush on the horizon, can Europeans expect a real change in transatlantic relations? 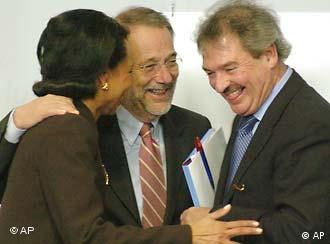 When Condi met Javier and Jean: Rice, Solana and Asselborn get cosy

The European Union appears far better disposed towards the United States after US Secretary of State Condoleezza Rice swept through the continent on a pre-summit charm offensive.

But while the coolly sophisticated Rice got on famously with everyone, it remains to be seen whether President George W. Bush will find such a good personal rapport when he meets EU and NATO leaders here on February 21.

Even as the two sides try to move on from their divisions over the US-led war in Iraq, new sources of discomfort are in the offing in the shape of Iran and China.

However, Rice and her EU interlocutors were at pains to stress that a new chapter is at hand after the Iraq conflict badly frayed transatlantic relations.

Europe ready to do business 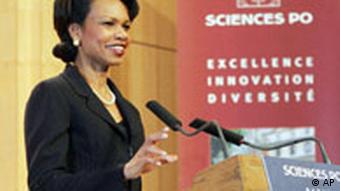 Speaking Thursday in Luxembourg as she wrapped up her week-long tour, Rice said Bush could now be sure of a "constructive, warm atmosphere in which everyone is ready to look well beyond the disagreements we may have had". Rice came to a Europe that appeared already in a mood to do business with Bush as he gets down to work in his second and final term.

EU foreign policy chief Javier Solana was more than happy to echo the message. "She has deepened her friendship with old friends, and I am sure she has made many new friends in Europe," he said alongside Rice. 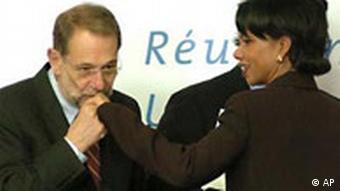 Solana said the EU and Washington must move on from their feuding of the past two years and work together, in the Middle East, in Afghanistan, in the Balkans and elsewhere. "With our cooperation, there will be a better world. This to my mind is the most important conclusion from the trip," he said.

The tide appears to be slowly turning. Through the NATO military alliance, France and Germany have swallowed some of their anger over the US-led intervention in Iraq by agreeing to train Iraqi security forces, albeit outside the country itself.

NATO itself is preparing to take on a bigger peacekeeping role in Afghanistan, a key US objective to ease strains on stretched American troop levels worldwide. Following talks with Rice at alliance headquarters on the outskirts of Brussels, NATO Secretary-General Jaap de Hoop Scheffer said that relations between the United States and its European allies have "turned a corner".

Luxembourg Foreign Minister Jean Asselborn, representing the EU's current presidency, said his own meeting with Rice had been marked by an "excellent ambience". 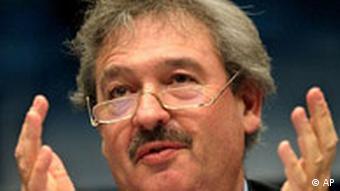 "I can safely assure you that today the transatlantic relationship, which has known, we all know, more difficult times months and years ago, is today very strong," he said.

Warm words, perhaps. But according to Daniel Keohane of the Centre for European Reform in London, the harmonious "mood music" now is infinitely preferable to the discordant jibes traded over Iraq. "Last month's elections in Iraq have helped the momentum. There's no point in arguing about the war any more as everyone agrees that we have to win the peace," he told AFP.

"This is all well and good, and sets things up nicely for the Bush visit. But there are a number of issues still simmering under the surface, not least China. And Iran could be even more divisive than Iraq," Keohane said. 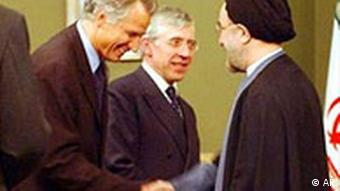 The EU's intention to lift a 15-year-old arms embargo against China provided one cause of dissent during Rice's talks in Europe. US suspicions about Iran's nuclear programme provided another, with Rice warning the heavyweight EU trio of Britain, France and Germany not to be too forgiving in their nuclear negotiations with the Islamic regime.

Those issues, along with climate change and perennial trade disputes, will no doubt be prominent when President Bush comes to Brussels later this month on his first overseas visit since beginning his second term.

He will as ever enjoy a warm welcome from British Prime Minister Tony Blair. What will be more intriguing is how Bush gets on with French President Jacques Chirac and German Chancellor Gerhard Schröder. But there at least the Rice tour has done much to smooth the way.

Condi the difference for Jacques, Gerd 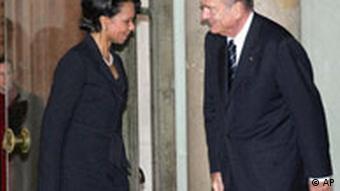 Indeed, Rice got a dose of French charm in return during a stop in Paris when Chirac showered praise on a keynote speech she gave pledging a new page in transatlantic ties.

But as a senior State Department official noted: "One swallow doesn't make a spring."

Confusion as Rice Backtracks in Brussels

US Secretary of State Condoleezza Rice Tuesday called on Europeans to come to a new chapter in transatlantic relations. How much should Europeans take on faith? (Feb. 10, 2005)

A day after heralding a new era in transatlantic relations, US Secretary of State Condoleezza Rice scolded her European allies Wednesday over their handling of nuclear talks with Iran. (Feb. 9, 2005)

The first female US secretary of state, Madeleine Albright, has died at the age of 84. Born in what was then Czechoslovakia, Albright never shied away from speaking her mind.