German Interior Minister Wolfgang Schäuble called the decision "crazy" and producer Hans Neuenfels protested, but Mozart's "Idomeneo" will not be performed at the Deutsche Oper because it could upset Muslims. 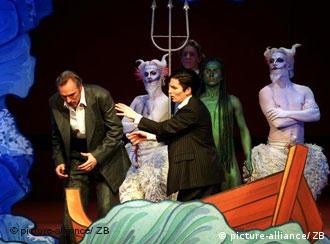 Hans Neuenfels' production sparked protest at the 2003 premiere as well

The Deutsche Oper in Berlin announced Monday "with great regret" that it had scratched Hans Neuenfels' version of the Mozart opera "Idomeneo" from the program this season because certain scenes presented an "incalculable security risk" for the theater.

"To avoid endangering the public and its employees, the Deutsche Oper in Berlin has decided to refrain from showing "Idomeneo" in November," the opera house said.

As early as July, security officials had warned of the security risk associated with the opera. A risk analysis was prepared, which formed the basis of the opera house's decision to cancel "Idomeneo."

"We have advised that a performance could result in disturbances," said police spokesman Bernhard Schodrowski, adding that the theater decided on its own to cut the opera.

Police emphasized that no concrete threats are known at this time. 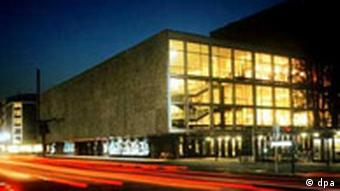 "The Marriage of Figaro" and "La Traviata" will replace "Idomeneo"

Interior Minister Schäuble said Monday from Washington that the theater's decision to cancel the work was "crazy" and "unacceptable." Wolfgang Börnsen, the culture and media spokesman for the conservative parties in parliament, compared canceling the show to an "act of prostration to the terrorists."

The theater's announcement will "encourage the radical scene to increase pressure and threats against Christianity and the occidental culture," Börnsen added.

Neuenfels, who describes surrealist artist Max Ernst as his "spiritual father," is already known for his provocative work. His "Idomeneo" already stirred up hefty protests when it premiered in 2003.

Clash of cultures and religions

In the epilogue, Idomeneo, the king of Crete, comes on stage comes on stage with a bloody sack in his hand. He then pulls the heads of Poseidon, Jesus, Buddha and Mohammed out of the sack and places them triumphantly on four chairs.

Neuenfels said he could understand the decision of the theater directors, but added they shouldn't let themselves be intimidated, the Berliner Morgenpost reported Tuesday.

The Sturm und Drang opera, set in the capital of Crete just after the Trojan War, addresses human resistance to making sacrifices to the gods. Mozart's original version premiered in 1781. Four performances were planned for Neuenfels' production in November but will be replaced by "The Marriage of Figaro" and "La Traviata."

While a majority of the summer's cultural events took place on open-air stages, as of September actors and singers are heading indoors to open the 2006-2007 opera and theater season. DW-WORLD.DE has the highlights. (10.09.2006)

Thousands of Palestinians demonstrated Tuesday at the urging of the radical faction Islamic Jihad to denounce caricatures of the Prophet Mohammed that appeared in Danish and Norwegian publications. (31.01.2006)

A spokesman for Pope Benedict XVI Saturday apologized to Muslims for citing a controversial passage that appeared to link Islam to violence. (16.09.2006)