Five presidents have conveyed for a crisis summit in Maputo to discuss how to combat rebels in Mozambique. The meeting comes just after 12 people were beheaded following an attack claimed by the "Islamic State." 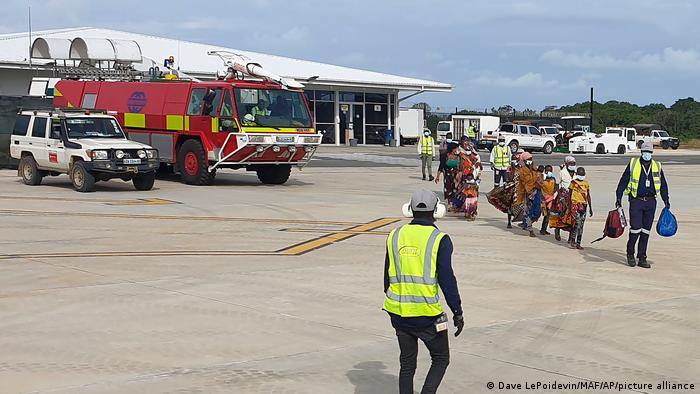 Southern African leaders issued a joint statement of concern on Thursday over the ongoing extremist violence in northern Mozambique, which has left thousands of people dead and displaced many more.

The presidents of Botswana, Malawi, South Africa, and Zimbabwe met with President Filipe Nyusi in the Mozambican capital, Maputo, to seek solutions to an "Islamic State"-tied insurgency that threatens to spread further instability in the region.

The leaders "noted with concern the acts of terrorism perpetrated against innocent civilians, women and children" in the Cabo Delgado province and "condemned the terrorist attacks in strongest terms; and affirmed that such heinous attacks cannot be allowed to continue," according to a press release.

The leaders, who met as part of the 16-nation Southern African Development Community (SADC), said they would convene for another crisis summit on April 29 to consider a "proportionate regional response" to the violence. No further details of counterterrorism measures were provided.

The summit comes just after 12 victims, possibly foreigners, were beheaded following an attack claimed by the "Islamic State" in the port town of Palma in Cabo Delgado.

A day before the beheadings, Nyusi declared government forces had regained control of Palma after a prolonged confrontation with armed rebels.

More than 100 insurgents attacked Palma on March 24. At least 50 people were killed over 10 days of fighting. Several of the victims were beheaded.

Thousands fled the town, which had more than 70,000 residents before the attack.

A team of technical experts will be sent to northern Mozambique to assess the situation and recommend measures the SADC could take.

During an address to the nation, Nyusi said his administration requested help from other countries, but he added that Mozambique does not want to compromise its sovereignty.

Mozambique's rebel insurgency began in 2017. Since then, more than 2,600 people have been killed, and at least 670,000 have been displaced, according to the United Nations, who warn of a massive humanitarian crisis.

South Africa has deployed troops in Mozambique following a jihadist attack on the northern town of Palma. This comes as French energy giant Total withdraws all staff from the region.