Move Over Soccer, the Handball World Cup Is Where It′s At | Sports | German football and major international sports news | DW | 01.02.2007

Move Over Soccer, the Handball World Cup Is Where It's At

Unless you were vacationing on Pluto last summer, you may have noticed a small event Germany hosted called the World Cup. If you did miss it, fear not: the handball version is here and proving to be equally fanatical. 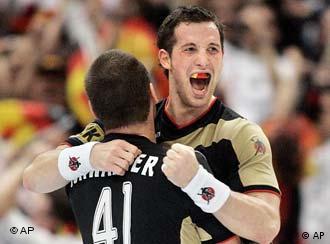 That winning feeling: In handball, as in soccer, emotions run high with victory

Is it possible that the soccer World Cup last summer has turned Germany into a country of sport-mad party animals? It might not be as wild an idea as it first seems. Especially if you take into account the frenzy that has been following the country's handball team through the rounds at the latest World Cup on German soil.

The whole of Germany including the soccer community has been gripped by handball fever, with expectations sky-high that the national team can be crowned world champions this weekend.

"We footballers are keeping our fingers crossed for you. Do what we didn't achieve: win the semi-final and become world champions on Sunday in Cologne," German soccer team coach Joachim Löw wrote in a letter to the German handball heroes on Wednesday. 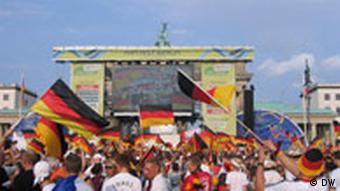 Now it's the handballers' turn, with Tuesday's thrilling 27-25 quarter-final triumph against title holders Spain serving as the latest confidence and popularity boost.

The hosts qualified for a semi-final clash against France, while Denmark will take on Poland in the other semi-final.

German papers in danger of running out of ink

Virtually all papers on Wednesday had front page photos and reports on the handball team, who are the toast of the nation just like the soccer team were seven months ago.

"Germany -- a handball dream!" screamed mass circulation Bild daily. "WE beat the world champions. WE are in the semi-finals. WE can really achieve the miracle now!"

Using capitals and bold type the likes of which have not been seen since Jürgen Klinsmann's men knocked out Argentina on penalties, the Bild statement is just a reflection of the country's mood in general when it comes to Heiner Brand's handball team.

Spectators swell venues used to half the crowds 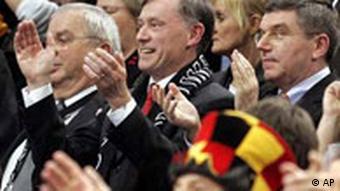 Crowds for Germany's games have been exceeding 20,000 spectators, around double the highest crowds attracted to the top domestic games. With every success so far, the handball team has been met with ever more enthusiastic support at the games and at the few public viewing facilities around the country.

While nothing quite resembles the fan-mile phenomenon of last summer, handball enthusiasts have been braving the dropping temperatures to watch Germany on the large screens positioned near venues in the host cities. And while the games have not attracted the attention of the main broadcasters, German Sports Television (DSF) has been showing every game, giving those fans off work for the tournament further excuses to head to the pub.

Just like their soccer counterparts last summer, the handball team was not rated among the top favorites when the world Cup started on January 19.

But the team improved with every game, most notably beating the European champions France in the main round last Saturday and then the 2005 world champions Spain on Tuesday in front of 19,000 in Cologne. 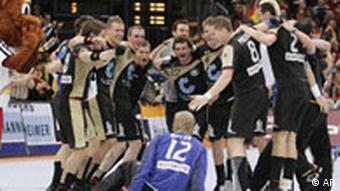 The German team have been bowled over by the support

"I am very satisfied and very happy," coach Brand said. "A few days ago I wouldn't have believed that we had a chance to make the quarter-finals.

"Maybe we would have had a setback if it hadn't been for the spectators. Now we have a chance against any team, but the field is so tight that you can't speak of a favorite. Anything is possible," he added.

Recalled veteran Christian Schwarzer said: "I have been in the sport for years but this is amazing."

The handballers will go into Thursday's semi-final clash in Cologne full of confidence. They not only beat France last Saturday, they can also take heart from the footballers, who won World Cup semi-finals against France in 1982 and 1986.

The French, meanwhile, will be out to avenge the weekend defeat and to emulate the footballers last summer by making the final. Coming off a 21-18 quarter-final upset against top favorites Croatia they will fear no one.

"The adventure continues but we have achieved nothing yet," said French player Jerome Fernandez.

Everyone wants to play -- and beat -- Germany 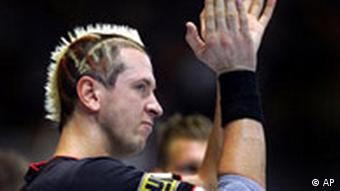 While France and Germany are in search of their third world title, Poland and Denmark, who meet on Thursday in Hamburg, have never lifted the trophy. The Danes came second in 1967 and Poland were third in 1982.

Denmark and Poland have also been gripped by handball fever. Poland, the only team to beat Germany in the tournament, advanced with a 28-27 win over Russia. The Danes won a thriller against Iceland, 42-41.

The Danes, meanwhile, hope to make the final against Germany, a natural ambition given that almost half of their players play for German clubs.

"A final against Germany would be the greatest thing, being a Danish player who plays in Germany," said Lars Christiansen from northern German club Flensburg.

Torsten Jansen opened and closed the scoring as hosts Germany beat title holders Spain 27-25 to make the semifinals at the world handball championships on Tuesday. (30.01.2007)

After beating Slovenia, a win Thursday against underdog Tunisia could see hosts Germany advance into the handball World Cup quarter-finals. (25.01.2007)

After the summer fairytale of the soccer World Cup last year, Germany is hosting the handball world championships this month and the German team are hoping to go one better than their soccer counterparts. (15.01.2007)

Germany's footballers have proved they can be a force in England after easily passing the test against a supposedly strong Spain. Group B winners already, the record eight-times champions could be the dark horses.