Mourning in Kyrgyzstan capital, unrest in the country′s south | World | Breaking news and perspectives from around the globe | DW | 09.04.2010

Mourning in Kyrgyzstan capital, unrest in the country's south

Tears and tension reigned in Kyrgyzstan as people in the central Asian nation began to bury those killed in Wednesday's bloody revolt. The uprising ousted President Kurmanbek Bakiyev, although he refuses to step down. 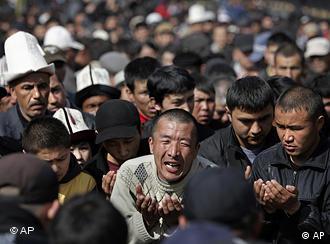 Two official days of mourning began Friday as thousands of people gathered in Kyrgyzstan's capital of Bishkek to lay flowers and pray for those killed in Wednesday's violent uprising.

The mourners crammed into Ala-Too Square to commemorate the 75 people who died as opposition rallies earlier in the week morphed into a chaotic revolt against the country's president, Kurmanbek Bakiyev. Funerals were being held around the country and an official ceremony of mourning is planned for Saturday.

"Bakiyev must be tried and executed for all these crimes," Fatima Imanaliyeva, a former prosecutor mourning two friends killed when security forces opened fire on demonstrators, told Reuters on Friday. "We will never forgive him. This is our revolution." 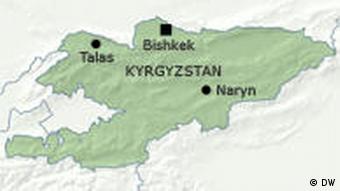 Unrest began in the provinces before spreading to the capital, Bishkek

Bakiyev fled the city during the revolt, and an interim government led by opposition politician Roza Otunbayeva, a former foreign minister, has established itself as a replacement. In an interview with Agence France Presse in Jalalabad on Friday, Bakiyev said he did not give orders to shoot protesters.

Overnight on Thursday, gunfire was heard in Bishkek as armed groups of men organized by the opposition stood guard with orders to shoot looters on sight. The health ministry reported that at least 49 people had been hospitalized in the previous 24 hours. The ministry updated the toll of injured to 1,520.

Otunbayeva told reporters Thursday that the current constitution would remain in place until a new one was passed by referendum. She said parliament had been dissolved, and the provisional government would take over presidential and legislative duties until elections could be held in six months.

Bakiyev has refused to step down. He told the BBC in a Friday morning interview that he has offered to hold talks with what he referred to as the "temporary government," and repeated his refusal to resign.

The European Union said it was moving to "facilitate a peaceful, negotiated resolution to the crisis" in cooperation with other members of the international community, according to a statement from EU Foreign Affairs Chief Catherine Ashton. Ashton is sending her special representative for Central Asia, Pierre Morel, to Bishkek on Saturday.

Meanwhile, ethnic tensions began to appear in Kyrgyzstan's south. The governor of the city of Jalalabad, a Bakiyev ally, fled the city on Thursday and a self-appointed governor addressed a crowd in front of the government offices the next morning.

"There are 70 percent Kyrgyz here, 15 percent Uzbeks and others," Kamchibek Tashiyev said, according to a report from AFP. "We must live in peace together."

But he was interrupted by an angry man in the crowd, who yelled, "You are doing everything for yourself -- you are taking it all for yourself! You should call the candidates and the people into the square and let them choose themselves." 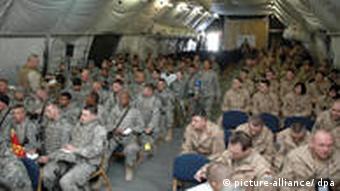 US base is open - for now

The central Asian country, formerly part of the Soviet Union, has in recent years hosted both US and Russian military bases. The US base in Manas is an important supply point for the war in Afghanistan.

Otunbayeva said the base would remain open, but another opposition politician, Omurbek Tekebayev, told Reuters that there was "a high probability that the duration of the US air base's presence in Kyrgyzstan will be shortened."

American officials downplayed the idea that the US could be asked to leave.

"We have an existing agreement with the government of Kyrgyzstan," said State Department spokesman P.J. Crowley. He did not specify which government.

Kyrgyzstan buries its dead as president clings to power

Mourning begins as the first victims of the anti-government protests are buried in Bishkek. Meanwhile, the Kyrgyz president refuses to step down, despite the formation of an interim government by the opposition party. (08.04.2010)

Anger at corruption and rising prices fueled violence in Kyrgyzstan

Violent clashes between police and protestors broke out on Wednesday in Kyrgyzstan. The protests are in response to the country's endemic corruption and the rising cost of living. (07.04.2010)

The opposition in Kyrgyzstan claims to have seized power after a second day of violent and deadly anti-government protests in the country. There are conflicting reports on casualties. (07.04.2010)

The Kyrgyz president refuses to step down