The mother of Beate Zschäpe, the woman on trial in Germany over her alleged role in a string of neo-Nazi murders, has refused to testify. Annerose Zschäpe claimed a legal right not to testify against a close relative. 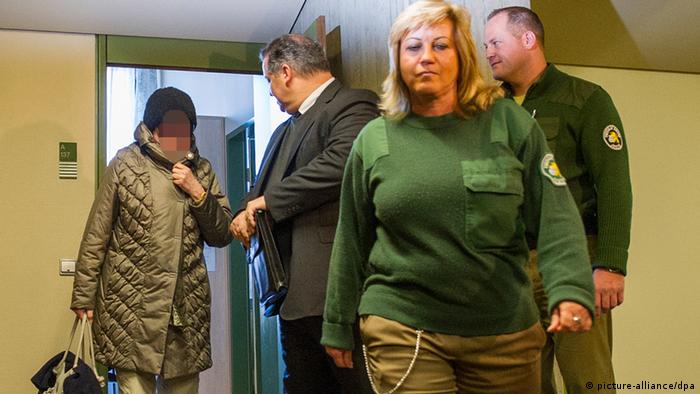 Annerose Zschäpe (pictured left), who appeared with her lawyer at the Munich Higher Regional Court on Wednesday, said she was using her right under German law to refuse to give testimony against a close relative.

In her brief, three minute appearance, the 61-year-old also directed that her statements made to officers in the November 2011 investigation of the case should not be used in court.

Beate Zschäpe is alleged to be the only surviving member of a trio known as the National Socialist Underground, which prosecutors claim embarked on an "execution-style" killing spree between 2000 and 2009.

The three, Zschäpe and the now-deceased Uwe Mundlos and Uwe Böhnhardt, were allegedly behind the murder of nine immigrants of Turkish and Greek background, as well as a German policewoman.

Prosecutors have portrayed 38-year-old Zschäpe as having been a troubled youth growing up in eastern Germany as communism came to an end - with the mass unemployment, youth crime and spread of neo-Nazi ideology that followed.

Parental failure has been an important issue in the trial, with Böhnhardt's mother giving evidence earlier in the month.

'Right, but not so extreme'

Mother and daughter, who are reported to have had a difficult relationship, were said not to have looked at each other in the courtroom.

Despite the refusal of Zschäpe's mother to testify, her cousin - identified only as Stefan A. - did speak in court on Wednesday about the childhood of the accused.

He described the defendant, with whom he grew up in the eastern German city of Jena, as "nice," but added that she was "not a girl to simply accept things." Zschäpe had right-wing leanings, he said, but these were "not so extreme" and commonplace among young people in the low-income city.

"We already had a bias towards the right then," said the 39-year-old. "We hated the state, foreigners, the left - just about everything," he said, but added that he had not directly discussed politics with Zschäpe.

Stefan A. added that he had lost contact with Zschäpe and the two men. "Uwe Mundlos disapproved of my lifestyle. I drank a lot and partied," he said, adding Mundlos had become a teetotaler.

German police and intelligence agencies have been criticized for their failure to detect a far-right motive for the killings, and for not following up a trail of clues that would have led to the group being caught.

Zschäpe is alleged to have set fire to an apartment she shared with Mundlos and Böhnhardt in the city of Zwickau, after the two died in an apparent suicide pact in November, 2011.