The latest round of Saudi-led airstrikes on Yemen Houthi rebel positions have led to the most powerful explosions so far in the three-week campaign. The focus is on weapon caches near the capital. 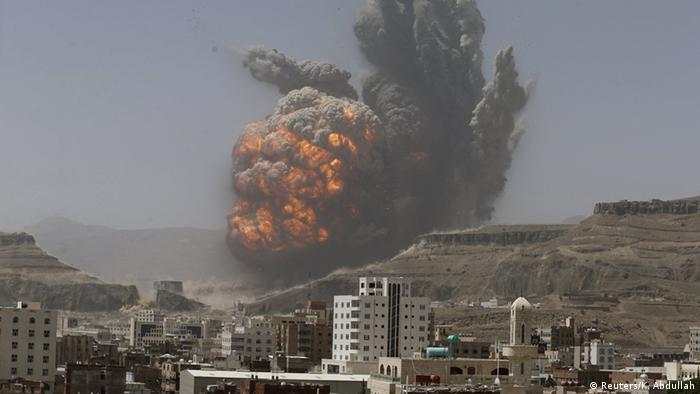 Witnesses reported mushroom clouds rising over the mountainous outskirts of the capital, Sanaa, on Monday. The Faj Attan area, where the largest weapon stores are located, has been the repeat target of the Saudi-led coalition air strikes which began three weeks ago.

A Yemeni official told the AP news agency that warplanes were demolishing parts of the mountain, in an attempt to uncover and destroy Scud missiles.

Windows shattered, streets were littered with glass, residents ran for shelter and a local television presenter was killed in the attack. A layer of soot was left on top of residential buildings. Anti-aircraft fire was heard across the city.

The Shiite rebel Houthis' TV network al-Masirah said Mohammed Shamsan, a TV presenter for another network, was killed and members of his crew were wounded. The network reported ten people had been killed and dozens wounded.

Aid agency Oxfam on Sunday condemned an airstrike that hit one of its warehouses in the northern province of Saada. "This is an absolute outrage, particularly when one considers that we have shared detailed information with the coalition on the locations of our offices and storage facilities," the charity's country director in Yemen, Grace Ommer said.

"The contents of the warehouse had no military value. It only contained humanitarian supplies associated with our previous work in Saada, bringing clean water to thousands of households," Ommer added.

Saudi Arabia and their allies in the Gulf began their airstrikes on March 26. With the help of security forces loyal to exiled former, they are attempting to push back the Houthi rebels. There was renewed fighting reported on Monday from the port city of Aden between Houthis and youth militia and Mansour-loyal forces.

Western governments and Sunni Arab nations claim Iran is backing the rebels in Yemen. Both the Houthis and Tehran deny the accusation although political and humanitarian support has been forthcoming.