Authorities in the North African country have charged 11 people, including five officials, in connection with Mouhcine Fikri's death. The fishmonger was crushed in a garbage truck while trying to save his stock. 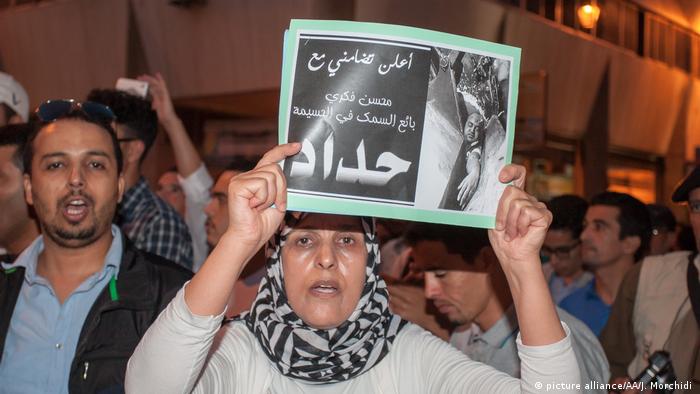 The general prosecutor said on Tuesday that the 11 people, including two interior ministry officers, two local fisheries officials and the veterinary chief in the city of Al-Hoceima, were charged with involuntary manslaughter.

The charges were made in connection with the death of a 31-year-old fishmonger, Mouhcine Fikri, last Friday. According to the prosecutor, the man had bought 500 kilograms of swordfish. Fishing the species is banned in Morocco from October 1 to November 30 each year. Fikri's truck was impounded inside the city and a veterinarian decided the food was unfit for consumption because of a lack of documents.

However, papers for destroying the fish were already prepared before seizing it, suggesting that officials had forged public documents.

Local media said Fikri jumped into the trash truck to try to salvage his wares. He was caught inside the crusher and died. Activists said the garbage men were given orders to crush the man, but state lawyers insisted there was no proof that there was an order to harm the fishmonger. 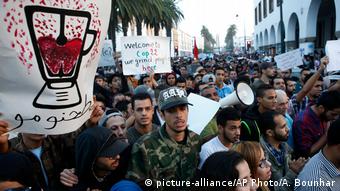 Thousands of activists took to the streets protesting Fikri's death. The four-day-long demonstrations were among the biggest since pro-reform demonstrations broke out during the 2011 Arab Spring.

Protesters staged rallies in al-Hoceima, in Morocco's north, in Casablanca and the capital Rabat, shouting "Mohcine was murdered, Makhzen is to blame." Makhzen is another word for Morocco's royal establishment. Thousands attended his funeral on Sunday after a picture of his dead body sticking out from the crusher went viral online.

In an effort to curb the unrest - which is rare in the country - King Mohamed ordered the interior minister to personally offer condolences to the fishmonger's family.

King Mohammed VI of Morocco is currently touring East Africa. Officially he is looking to improve relations with the region but he has another goal: Find support for Morocco joining the African Union. (25.10.2016)