More than 300 reindeer killed by lightning storm in Norway

Hundreds of dead reindeer have been discovered following a lightning storm in southern Norway. Officials say it was an unusually large natural disaster. 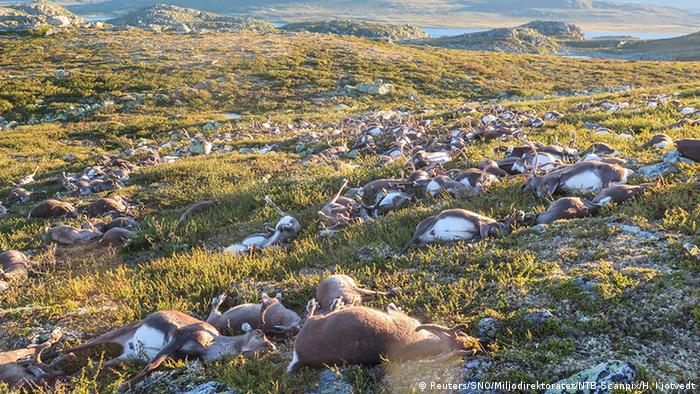 A gamekeeper at Norway's Hardangervidda plateau discovered the reindeer following a thunderstorm, authorities said on Monday.

At least 322 reindeer were apparently struck by lightning on Friday as they clustered together during a storm. Some of the reindeer were still alive when they were found, but had to be put down due to their injuries.

While park officials said it was not unusual for the occasional animal to be struck by lightning, the magnitude of Friday's incident was almost unprecedented.

Lightning risk 'much higher for animals'

How could hundreds of animals have died in a single lightning storm in Norway? DW speaks to the head of a high-voltage lab to find out. (29.08.2016)

"It's unusual. We've never seen anything like this on this scale," Kjartan Knutsen, an official from the Norwegian Environmental Agency, told the AFP news agency.

Authorities have not yet decided what to do with the reindeer.

The Hardangervidda national park is a popular tourist attraction, known for its natural beauty and the largest herd of wild reindeer in Europe.

300 reindeer killed by lightning in Norway