Japanese rescuers say they have found more than 30 people feared to be dead at Mount Ontake volcano, which erupted suddenly on Saturday. If confirmed, they would be the first deaths in an eruption in Japan since 1991. 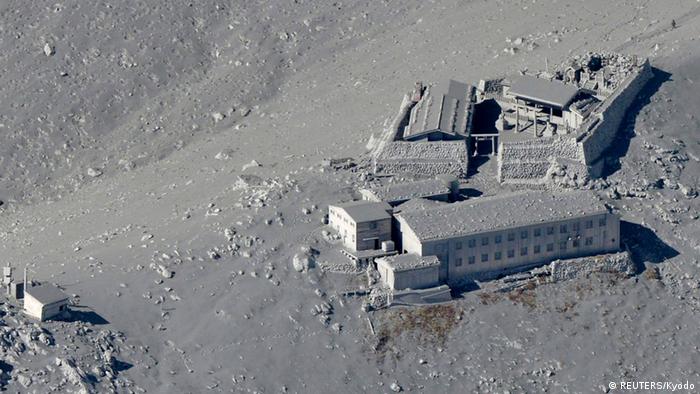 Rescuers searching the slopes of the Mount Ontake volcano in Japan following an eruption said on Sunday they had found more than 30 people in a state of "cardiopulmonary arrest" near the peak - the customary term used in Japan to describe bodies until police doctors can confirm death.

Most of the 250 people on the mountain when it erupted without warning on Saturday managed to make their way down safely, but the group of hikers concerned had spent the night just below the peak, which is 3,067 meters (10,062 feet) high.

The Fire and Disaster Management Agency earlier said that more than 40 people were injured, several with broken bones, after the volcano sent ash pouring down its slopes for more than three kilometers (two miles) without giving any warning that an eruption was imminent.

Mount Ontake was still erupting on Sunday, with ash being found on cars 80 kilometers (50 miles) away.

Aircraft were briefly forced to change routes to avoid volcanic ash, but most services were back to normal by Sunday, a spokeswoman for Haneda airport in the capital, Tokyo, said.

The last deaths from an eruption in Japan - one of the world's most seismically active countries - were in 1991, when 43 people died in a superheated current of gas and rock at Mount Unzen in southwestern Japan.

Mount Ontake, some 200 kilometers (125 miles) west of Tokyo, is a popular destination for people wanting to view autumn foliage.