More Room for Foreigners in Bundesliga

Managers' opinions are divided on a change to the German soccer rule limiting how many non-EU players a team can have. Some say it will help the game, others contend it will only benefit top clubs. 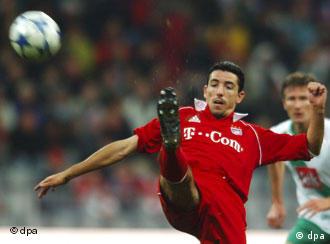 Soccer coaches may be well known for their ability to calculate exactly how many points they need to advance to a tournament's next round or avoid relegation, but keeping track of the number of foreign players they have on the field is not always their forte.

One of the worst mathematical mix-ups occurred in the 1992/93 season, when Stuttgart's then coach Christoph Daum substituted Serbian Jovica Simanic into a Champions League match against Leeds, accidentally putting one too many foreigners on the field.

Stuttgart won the game 3:0 that night, but judges turned around the decision because of the infraction, and Stuttgart were eliminated from the tournament. 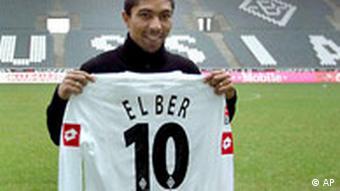 Once the Bundesliga's most successful foreigner, Brazil's Giovanne Elber handed in his Gladbach jersey in December

Starting next season coaches will no longer need to make their players' names with flags when determining the line up, and the entire Brazilian team could take field for Kaiserslautern -- if the Bundesliga's last-placed team were able to put together enough money to pay them.

A rule change, which came during a late December meeting of the German Football League (DFL), will exchange the current four-player limit on non-UEFA players with other rules to promote player development programs.

Bayern Munich and Werder Bremen, two German teams in the Champions League, had repeatedly called for reform to the foreigner rule in the past. Bayern manager Uli Hoeneß was especially critical of the rule he said hurt German clubs' chances in European competition.

"A German player has to be of good quality, not fulfill a quota," he said. "We cannot keep the portion of Germans up with artificial rules, otherwise we make ourselves weaker internationally."

Heribert Bruchhagen, head of the much smaller club Eintracht Frankfurt, said the new rule would only benefit the biggest, richest clubs, while the small ones remain left with the job of training young players because they can't afford more established stars.

"The gap between the big and small clubs is only going to get wider, and the German players' position is not strengthened," he said. "This rule is bad for German soccer." 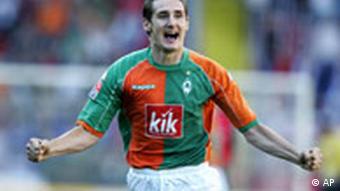 The DFL, however, also implemented the UEFA's Local Player rule, which it said will make sure Bundesliga teams are motivated to train younger players.

The Local Player rule demands each club have at least four locally trained players. Players between 15 and 21 who have been with a club for at least three years qualify as locally trained.

Though the Bundesliga's locally trained players need not be German, each team is additionally required to have at least 12 German players on its roster. That's a part of the new plan Mönchengladbach's youth trainer Max Eberl said fits well with developing German talent.

"It fits with our philosophy and is also a sign of appreciation for the clubs with good youth programs," he said, before adding that Gladbach plan to fill about a third of the team with players from their development program.

The DFL said the new rules would hardly be noticeable to all but the most detail-oriented observers.

"We do not fear any serious changes to the proportion of foreigners in the Bundesliga," DFL spokesperson Christian Pfennig said.

After racist chants in stadiums in Italy and Spain last weekend brought African players to tears, the European Union and soccer's governing body are planning to get tougher on soccer's major problem. (Dec. 1, 2005)

Ten years ago this week, the European Court of Justice handed down a ruling that revolutionized European soccer. With the Bosman decision, players could switch clubs freely -- a blessing for only a few clubs. (Dec. 17, 2005)

Is the Bundesliga too Weak?

Germany's Bundesliga may be one of the biggest soccer leagues in Europe, but it's far from the richest or most competitive. Accordingly, the league is finding it hard to attract the world's best players. (Sept. 13, 2005)

As an 8-year-old, Jamyang Chotso hid in caves and walked through the night as she left her parents behind to flee Tibet. Now she'll captain her country in a World Cup that is about more than sport.