More deaths in Venezuela amid pro and anti-Maduro rallies

Three people have been reported dead in Venezuela, as demonstrators rallied for and against President Nicolas Maduro. More than 30 people have now been killed in unrest over the past five weeks. 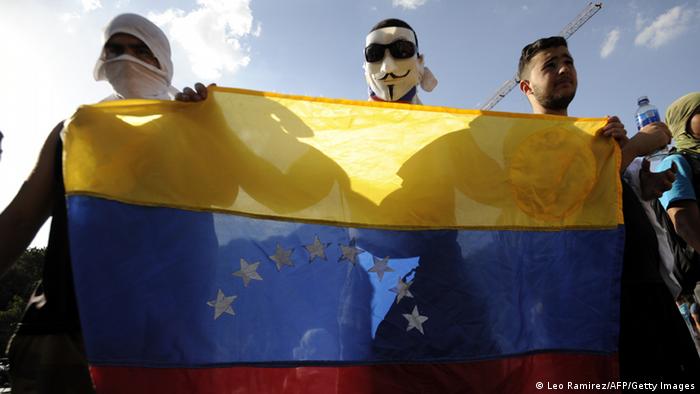 There were further reports of deaths on Saturday as protesters rallied in the Venezuelan capital, Caracas and beyond.

"In the name of freedom, put an end to the dictatorship now," read one of the banners that were held aloft in the capital.

Opposition demonstrators have vowed they will stay on the streets until Maduro stands down, amid public anger over hyper inflation, goods shortages and soaring crime.

A man identified as Jesus Orlando Labrador died from a gunshot wound to the chest Saturday in the southerwestern city of Merida, Mayor Carlos Garcia told the Associated Press news agency. The incident happened when suspected hard-line government supporters fired on anti-government protesters.

Local officials reported that 26-year-old Argenis Hernandez, had been shot in the abdomen while demonstrating near a barricade in the city of Valencia. The man was reported to have died of his wounds in hospital early on Saturday morning.

In the city of San Cristobal - a hotbed of protest - bus driver Wilfredo Rey was shot in the head on Friday night after armed Maduro supporters were said to have entered a largely anti-government neighborhood and begun firing. Rey had not been involved in any of the protests, officials said.

While many of the anti-Maduro protests have taken place in the country's more middle-class neighborhoods, the president - who succeeded leftist leader Hugo Chavez - still retains substantial support among the country's poorer population.

Maduro has blamed many of the country's problems on efforts by the US to undermine the economy and oust him in a "fascist conspiracy."

"This Venezuelan right-wing is especially conspiratorial and is trying to drive a hole through our democracy," Maduro said in televised remarks on Saturday.

Thousands of students and party members affiliated to Maduro's socialist government rallied in Caracas, marching from the Plaza Venezuela Square to the National Assembly.

Opponents of Maduro claim that the police have employed "heavy handed" tactics against them, with political representatives refusing to enter dialogue with the government until it frees more than 100 protesters who have been detained. Maduro on Friday placed the cost of damage caused by the protests at $10 billion (7.25 billion euros).