Venezuelan opposition leader Henrique Capriles will not take part in a conference to resolve recent political unrest. Capriles said he would not join in while fellow opposition chief Leonardo Lopez remained in jail. 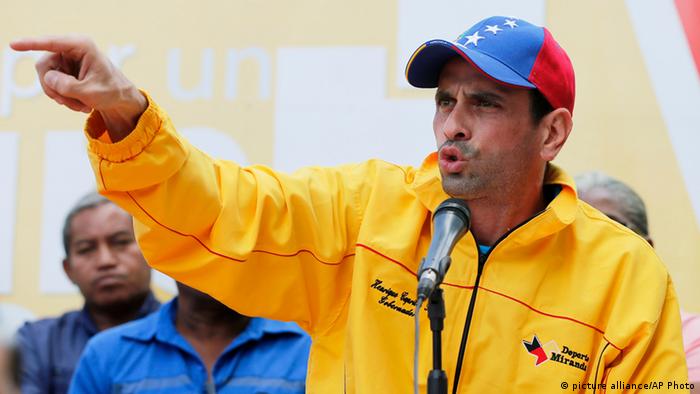 Capriles told reporters on Monday that going to the meeting at the presidential palace, Miraflores, would appear to be an endorsement of a government that he claimed was involved in repression.

The fomer presidential candidate said he would maintain the boycott as long as fellow leading opposition figure Leonardo Lopez remained in jail along with a number of student activists.

"I am not going to make Nicolas Maduro look good. That is what they want, that I go there as if the country was absolutely normal," said Capriles.

"This is a dying government," he added. "I'm not going to be like the orchestra on the Titanic. Miraflores is not the place to talk about peace - it's the center of operations for abuses of human rights."

Capriles, who is governor of the affluent Miranda state, was invited to meet Maduro along with mayors and governors from across the country as the goverment seeks to put a lid on the unrest.

At the meeting, which was attended by just one of the country's three opposition governors, Vice President Jorge Arreaza said Maduro wanted to preside over the session to discuss his peace plan. "We know that those of us who are here have the shared interest to build a peaceful society," said Arreaza. .

Anti-government demonstrators on Monday erected barricades and set fire to trash, despite pleas by opposition leaders to rein in their protests.

Opponents of Maduro's administration claim it is responsible for the country's high crime rate and spiraling inflation. They have been staging the latest protests since February 12.