US agrochemicals giant Monsanto has dropped its unwelcome takeover bid for Swiss rival Syngenta. Antitrust concerns were among Syngenta's reasons for rejecting its American suitor, the company said. 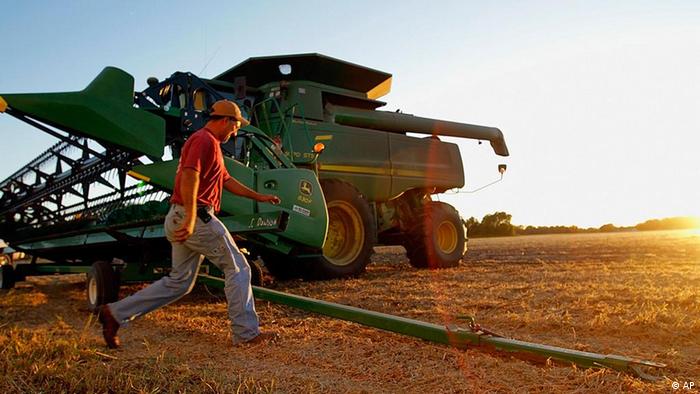 Monsanto, the giant US corporation that produces pesticides and genetically engineered pesticide-resistant seeds, announced Wednesday in New York that it would discontinue its attempt to take over its Swiss rival Syngenta.

"Without a basis for constructive engagement from Syngenta, Monsanto will continue to focus on its growth opportunities built on its existing core business to deliver the next wave of transformational solutions for agriculture," Monsanto said in a statement. It also said it would resume a share buyback program.

Syngenta confirmed it had rejected Monsanto's latest and last offer, which "significantly undervalued [Syngenta] and was fraught with execution risk."

Monsanto's most recent bid, proposed August 18, was worth about $46 billion (40 billion euros). Over the past weeks, Syngenta had repeatedly said it was worried a merger deal between the two giants would be blocked on antitrust grounds.

Monsanto shared have droped 13 percent between August 18 and 25 amid global market turmoil. With nearly half Monsanto's takeover offer based on a share swap, the merger would have entailed significant exposure to market volatility.

Syngenta said in its statement Wednesday that "recent market volatility" had "highlighted the significant risk" to Syngenta's shareholders associated with the proposed merger.

After the two companies announced merger talks were over, Syngenta shares dropped 18 percent and Monsanto shares jumped by over 8 percent.

Monsanto had envisioned shifting the merged company's headquarters from Monsanto's current home base of St Louis, in the midwestern US state of Missouri, to Britain.

The idea, according to Monsanto chief executive Hugh Grant in an April 18 letter to Syngenta executives, was that "our merger will create a new global enterprise focused on future growth across all geographies... The combination of our companies would redefine the future of agriculture."

Syngenta said Monsanto had failed to provide "sufficient clarity" on a number of concerns, including regulatory risk, the tax consequences of shifting the company's registered headquarters from the US to Britain, and the estimated financial benefits of the proposed merger.

"We engaged with Monsanto in good faith and highlighted those key issues which required more concrete information in order to continue a dialogue. We take note of Monsanto's decision," Syngenta chairman Michel Demare said, adding that "our Board is confident Syngenta's long-term prospects remain very attractive."

Syngenta was itself formed in 2000 as a result of the merger of Swiss-based Novartis Agribusiness and UK-based Zeneca Agrochemicals, which were the agrochemical, seeds and biotech businesses of pharmaceuticals and agrochemical giants Novartis and Zeneca.

Mergers in the agrochemicals industry have led to a situation where only six companies dominate the bulk of global agrochemicals sales, including Syngenta, Bayer CropScience, BASF, Dow Agrosciences, Monsanto and DuPont.

Scotland's government says it plans to ban the cultivation of genetically modified crops. While widely grown in the Americas and Asia, there is more skepticism over the practice in Europe. (09.08.2015)