The dark side of Italian hazelnut farming 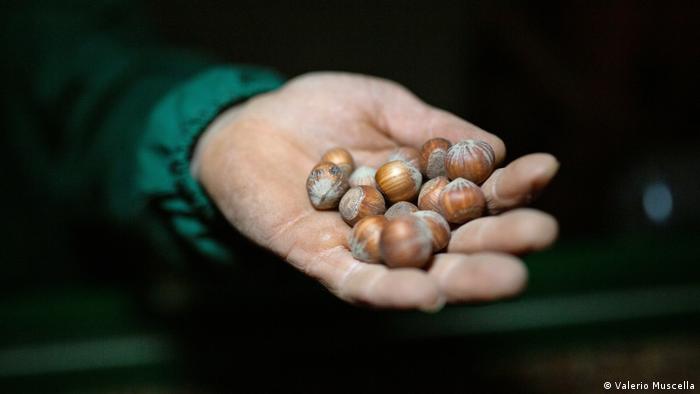 As the early morning mist clears to reveal the turrets of San Quirico Castle in central Italy, the greenery surrounding local farmhouses comes alive with sound: Red-bellied woodpeckers chirp and bright-green tree frogs call to each other among the cypress and beech trees.

But walk a little further towards the fields of young hazelnut plantations and there is suddenly silence: the birds and insects have been driven away by the monoculture. Seemingly never-ending lines of saplings are now the defining feature of Alfina plateau which lies a few hundred meters above sea level. Until recently, much of this area was composed of wildflower fields and a patchwork of different crops.

"Six or seven years ago this place looked completely different," Gabriele Antoniella said. He works as a researcher and activist with Comitato Quattro Strade, a conservation organization in Alfina. Antoniella estimates there are around 300 hectares (741 acres) of new plantations in the area, mostly owned by a few large investors.

The plateau sits in the northern section of Tuscia, a historical region in Viterbo province and the heart of Italy's hazelnut production. Around 43% of the agricultural land in Viterbo is reserved for hazelnut orchards, the bulk of which goes to the confectionary industry for use in products such as nougat and chocolate. 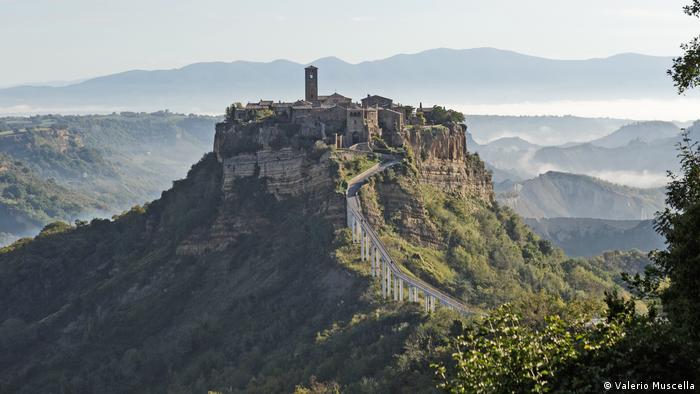 Local environmentalists say once many of the saplings grow, beloved views will also be obscured 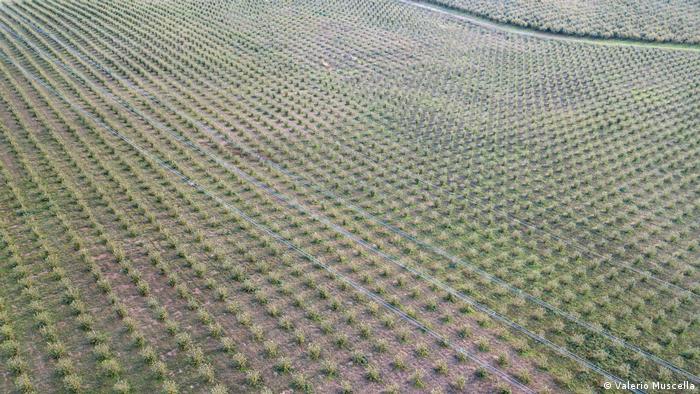 Monocultures are believed to be damaging the air, soil and water

The nuts have been grown for thousands of years in the southern part of Tuscia and have largely sustained its economy since production ramped up in the 1960s. But the intensification of monoculture practices and their expansion into new areas such as the Alfina plateau is an increasing concern for environmentalists.

Impact of monoculture on water, soil and air

Several diverse cropshave been replaced by hazelnut plantations, and hedgerows have been cleared to minimize the presence of insects. As the nuts are harvested once they fall, the ground beneath the trees is also usually kept completely free of vegetation.

"For us the hazelnut represents a great resource, but it's cultivated in an unsustainable way," said Famiano Cruciarelli, president of the Biodistretto della Via Amerina e delle Forre, an environmental organization in southern Tuscia. "Hazelnut monoculture has caused problems with water, soil, and air."

The use of chemical fertilizers and pesticides treatments, he says, is making the soil increasingly arid, which in turn has led to its erosion in some places. And during harvest season, clouds of dust are kicked up into the air by the heavy machinery. "That dust is full of chemicals, which are a big problem for people's health," he said.

One of the most glaring examples of environmental degradation can be seen in a nearby volcanic lake encircled by decades-old hazelnut plantations.

"Large quantities of fertilizers have been used in the intensive hazelnut cultivation, and they have ended up in Lake Vico," explains Giuseppe Nascetti, a professor at the Tuscia University who has been studying the lake for over 25 years. This has caused the proliferation of so-called "red-algae," which produce carcinogenic chemicals harmful to environmental and human health. 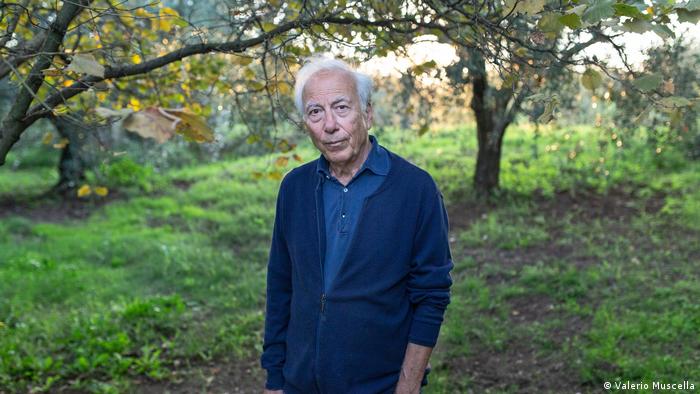 Famiano Crucianelli says monoculture has made the soil increasingly arid High-levels of fertilizers have been found in Vico Lake, a body of water surrounded by decades-old hazelnut plantations

Expansion of the industry

While the transformation towards monoculture has been underway for decades, environmentalists say the growing demand for hazelnuts from big companies and investors has further fueled this shift.

Italian manufacturer Ferrero Group, which makes the chocolate and hazelnut spread Nutella, doesn't own or run any farms in the region but is one of the biggest consumers of the nuts produced in Tuscia.

In 2018, the company launched its Progetto Nocciola Italia plan which aims — in cooperation with farming associations — to increase hazelnut plantations across Italy by 20,000 hectares by 2026. In Lazio — a region that includes Alfina plateau — the company is also working with local producers through a farming association in Lazio to develop 500 hectares for the crop over a five-year period. According to Ferrero's figures, 17,708 hectares are currently devoted to hazelnut cultivation in Viterbo, and 80,000 across Italy.

A Ferrero spokesperson said it was a company objective to integrate hazelnut shrubs with existing crops — and that organic production is neither an obligation nor prohibited.

They add the company is also working in collaboration with researchers including those at Tuscia University to "gain a better understanding of its environmental impact" and "enhance sustainability in hazelnut cultivation." 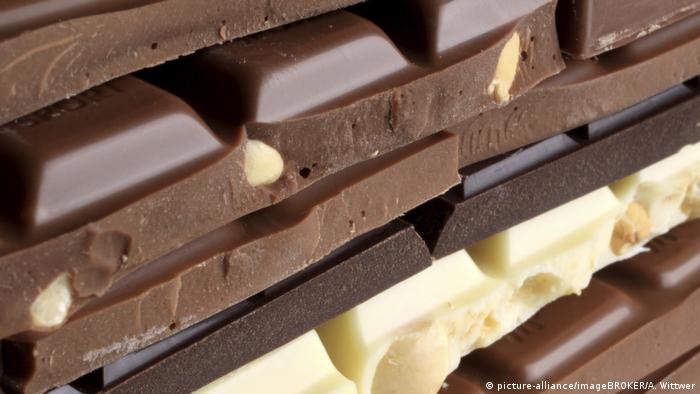 Yet as local farmer Anselmo Filesi has discovered, choosing a sustainable path isn't without its challenges.

In 2002, concerned about the environmental and health impacts of using pesticides, he converted his small 20-hectare hazelnut plantation in southern Tuscia to organic methods.

But it came at a cost. Filesi says he was no longer able to sell his products to the world's biggest buyers: Most confectionary multinationals require hazelnuts with little damage from shield bugs — a common pest which can cause shriveled kernels and a slightly bitter taste.

"This is very difficult to achieve with organic methods," Filesi said. "If the hazelnuts are not perfect the market will not accept them."

Filesi shells, toasts and packages his own produce before selling it directly to local shops and supermarkets. But he says it's harder for bigger farmers — which usually sell pre-processed nuts in bulk – to make the switch as they fear losing their biggest buyers.

The rush to invest in hazelnut plantations in the area is also increasing land prices, says Filesi, making it harder for small farmers like him to buy or rent land.

"Converting all hazelnut plantations to organic ones could be one way forward, but there is no incentive to do so," said Professor Nascetti, citing a lack of commitment from big companies to pay good prices for organic produce. "Until sustainability is put before profit ... it's unlikely this will happen."

"People do not imagine that behind a jar of hazelnut [spread] there is an environmental and social economic catastrophe," Antoniella said. By staging protests against intensive agriculture, encouraging smallholder farmers to turn to organic farming and not to sell their land, activists hope to foster a new relationship between locals and the land.

"We are not against hazelnuts, but against these agro-industrial methods that don't respect our land," Antoniella said. "We want to show that things can be done differently, that agriculture can be based on respect for the environment."

He glances at the endless lines of saplings and explains that once the trees grow, the striking view of San Quirico castle perched on a hill in the background will be obscured. "The landscape will change forever."