Mongolian minister wants to benefit from German know-how | Asia | An in-depth look at news from across the continent | DW | 02.04.2010

Mongolia's Minister of Environment and Tourism, Gansukh Luimed, recently visited Germany. His huge country is very thinly populated. However, this does not mean it doesn't have a number of serious environmental problems. 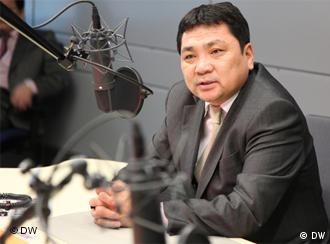 "We are currently developing our climate change adaptation strategy. Germany has a long tradition and experience in forest management. And it has already developed climate models for the next 100 years.

"We are sharing experience in these fields. There has also been research done in Germany and we hope to learn some things that we can implement in Mongolia."

Gansukh pointed out that Mongolia faced considerable problems related to climate change despite the fact that it is a landlocked country. 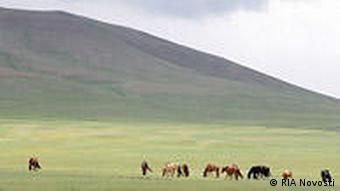 Overgrazing has become a serious problem

"The average elevation in Mongolia is around 1,500 meters above sea level," he explained. "And due to our geographical conditions, Mongolia is one of the countries which are very strongly impacted by the global climate change."

"This can be illustrated by one figure: The global average temperature rise has been of 0.74 degrees centigrade, whereas in Mongolia temperatures have risen by 2.1 degrees in the past 70 years, three times the global average. This causes serious problems such as water shortage, the drying up of rivers and springs, as well as drought and increasing desertification, which also leads to biodiversity loss."

70 percent of Mongolia affected by desertification

The minister stated that as much as 70 percent of Mongolia's territory was affected by desertification. But climate change is not the only problem. Many Mongolians depend on sheep and other animals for their livelihood and overgrazing has become a serious problem.

"We are exploring the possibility of exporting our products from animal husbandry. And if we can do that, then we will also be able to invest in decreasing the quantity but improving the quality of animals, increasing their productivity. Of course, quite an amount of investment is needed to do this which is why it will take time." 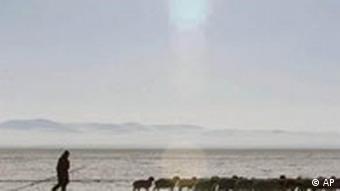 Dealing with air and water pollution will also take time, as basic infrastructure is missing even in the capital, Ulan Bator, where large areas are not connected to sewage systems.

Mining is another huge ecological challenge

Another ecological challenge facing the country is caused by mining. The industry is already very important in Mongolia but it is likely to grow dramatically over the coming years as there are huge reserves of minerals such as coal, copper, gold and uranium.

There have been reports that illegal gold miners, so-called "ninjas", have been polluting the environment with mercury.

Instead, the government plans to develop big mine projects in southern Mongolia in collaboration with foreign investors.

Bringing back the blue sky to Ulan Bator

Mongolia is around four times the size of Germany but only home to three million people. About half live in the capital Ulan Bator, which is plagued by smog though there is little industry. Germany's GTZ is helping out. (17.03.2010)

Many German youngsters don't want to start university or work right after leaving school. They prefer to take some time off to discover the world and themselves - and many like to do something useful at the same time. For example with the German Development Ministry's volunteers service "Weltwärts" - which means something like "world-wards", or "into the world". Last year, more than 2200 young people went to Asia, Africa or Latin America as volonteers as part of this programme. This year, the figures will double. Since September, the first volunteers have been serving in Mongolia's capital Ulan Bator. (10.11.2009)