The fourth week of "Monday demonstrations" against German Chancellor Gerhard Schröder's welfare reform measures drew tens of thousands of marchers across the country but figures were down from the previous week. 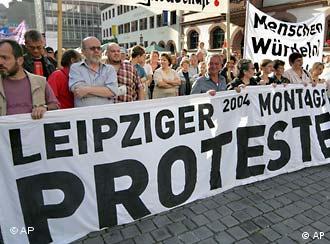 The protests go on despite the dwindling numbers of marchers

In what have become regular weekly demonstrations against the German government's labor market and social security reform plans, protestors once again took to the streets in cities across Germany in the latest of the new wave of "Monday demonstrations." However, the expected numbers of demonstrators were well below the estimates of organizers.

At least 70,000 people in total marched against Schröder's reform measures, set to come into force in January, which will reduce benefits for the long-term jobless and their families.

But the number of marchers was significantly lower than the 100,000 protesters projected for the demonstrations organized in 140 cities. Trade unions, left-wing lobby groups and the ex-communist Party of Democratic Socialism (PDS), who say the cuts target the poor, were optimistic that more people would protest than the 90,000 participants who took to the streets the previous Monday.

Most of the latest protests were concentrated in eastern Germany, where unemployment in some areas is well over 20 percent, and where the proposed reforms are likely to hit hardest. In the eastern city of Leipzig, organizers said 30,000 people had turned out to demonstrate, although police put the figure at 16,000.

The cuts will hit an estimated 1 million people in the east where the population is only 16 million, and 1.2 million in the more populous and prosperous western part of the country, which has a population of more than 65 million.

The measures will require those on unemployment benefit to use family savings and life insurance policies to support themselves, a policy that has caused horror stories to spread through the heavily jobless east and into the west of the country provoking mass demonstrations.

East and west united in protest

The fourth weekly protest drew several thousand demonstrators in the eastern towns of Magdeburg, Halle, Chemnitz, Gera, Zwizkau and Schwerin while protests were also gathering steam in the western cities of Bochum, Stuttgart and Mannheim.

Berlin saw a high turnout of about 15,000 people according to organizers, but again police figures estimated the number of protestors at about half that number. However, divisions between protesting groups were in evidence in the capital as two rival marches snaked across the city due to opposing views over certain aspects of the reforms.

In the ruling Social Democrats' industrial heartland of North-Rhine Westphalia, some cities recorded double the protestors of the previous week. Around 1,000 demonstrators marched in Cologne and 1,200 in Dortmund. There was also a rally in the Bavarian capital Munich for the first time, with about 200 protesting in front of the labour office.

Tens of thousands demonstrated Monday in 30 cities of former communist East Germany against economic reforms by the government of Chancellor Gerhard Schroeder that would cut back unemployment benefits. (August 9, 2004)

Back to the Streets for Anti-Reform Germans

The German government's concessions to its planned employment market reforms have done little to change the frustrated mood among the public. For the second Monday running protest action is planned across the country. (August 18, 2004)

The success of Germany's "Monday Demonstrations," are symbolic of the unexpected return of the reformed Communists, who took a drubbing in the last federal elections but are ahead of the chancellor's party in some polls. (August 23, 2004)