Ex-Communists Ride High on Protest Wave | Germany| News and in-depth reporting from Berlin and beyond | DW | 23.08.2004

The success of Germany's "Monday Demonstrations," are symbolic of the unexpected return of the reformed Communists, who took a drubbing in the last federal elections but are ahead of the chancellor's party in some polls. 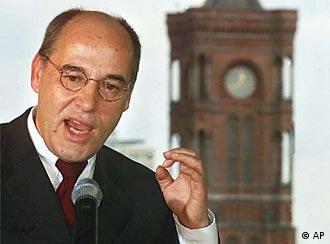 Some 80,000 protesters took to the streets on Monday evening in mass rallies against Chancellor Gerhard Schröder’s welfare reforms throughout Germany.

It was the third wave of so-called "Monday Demonstrations," a term used by Eastern Germans during their protests in 1989 that toppled communism in the region and paved the way for German unification. Curiously enough, the protests in the east this time are directed against a democratically elected government and it’s the former communists of the leftist PDS that stands to profit most.

"The reforms are hurting the poor while the rich continue to pocket huge profits," one Berlin protester told Deutsche Welle.

These popular perceptions of Schröder’s welfare reforms are providing the perfect breeding ground for the comeback of Germany‘s post-Communists. After crashing out of the national parliament two years ago, they have now surged to a record high in opinion polls, enjoying 7 percent support nationwide. In economically depressed Eastern regions, the PDS is now the second-strongest party.

The reformed Communists' charismatic figurehead, Gregor Gysi, says his party was just putting a finger on the sore spots of Schröder’s reform policy. "The economic situation in Eastern Germany," he said, "doesn’t seem to matter anymore -- neither to the government nor to parliament. In addition, the cuts always hit the weakest in society while the well-to-do are left untouched." 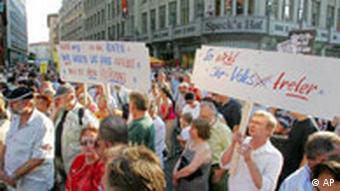 Anger over the government’s welfare cuts is especially strong in eastern Germany, because the majority of the 3 million people who are affected by them live there. The new measures include stiff means-testing and deep cuts in monthly benefit payments for the long-term unemployed. The chancellor’s Social Democrats are feeling the heat, and with only 21 percent support in the opinion polls, they are trailing the PDS by 5 percent ahead of two regional elections in eastern German states.

Is populism on the rise?

SPD leaders like Party Manager Uwe Benneter are growing nervous and have accused the post Communists of stoking popular fears. "The PDS is exploiting the reforms for electioneering purposes in a disgustingly populist manner," Benneter said. "We must strengthen our campaign to debunk those who are intent only on stoking anger without presenting alternative solutions of their own."

Political analysts believe, however, that the protests are underscoring a persistent trend in the electorate in the East that includes a drift away from the established parties towards those on the extremes.

"There is indeed a danger of that, and it is being sustained by the fact that Eastern Germans have never had strong party affiliations," said Michael Edinger, a political scientist at Jena University. "We’re also coming to realize that such loose political ties could be the future of politics in all of Germany, raising the specter of large numbers of protest voters quite ready to support extremist parties at the ballot box."

Rightwing-extremist parties are already profiting from the mass protests. In Saxony the National Democratic Party could enter the regional parliament in September. The party could increase its votes from one and half to over 5 percent compared the last election, polls have shown.

Meanwhile, in Brandenburg the German People’s Union is expected to hold its seats in parliament. Both parties have waged anti-reform campaigns as seeking to stoke resentment towards foreigners.

As demonstrators take to Germany's streets again on Monday to protest the government’s planned labor reforms, the SPD is trying to diffuse the discontent by rekindling a public debate on minimum wages. (Aug. 23, 2004)

German Press Review: Do We Need a Minimum Wage?

Monday's editorial pages weighed in on the debate about whether Germany should institute a minimum wage and the controversy surrounding Germany's equestrian team, which lost two medals to appeals. (Aug. 23, 2004)