Moldova's pro-western government coalition has elected its candidate to the post of parliament speaker after a walkout by Communist legislators. Mihai Ghimpu is the first non-Communist to hold the post since 2001. 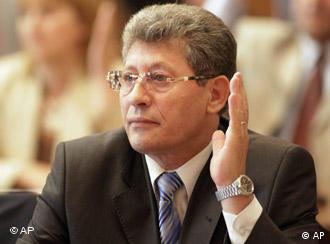 Members of the For European Integration alliance unanimously elected Mihai Ghimpu to the post on Friday. The Communists, the only party outside of the alliance with seats in parliament, had walked out of the session after the alliance refused to delay the election. They have vowed to challenge the vote in court.

"This is proof of changes in the country that voters were waiting for," Gimpu told news agency dpa. "I am confident that (the ruling coalition) will move Moldova dynamically on the path of integration into the family of European nations."

The alliance also said Friday that it had decided to nominate Democratic Party leader Marian Lupu, who defected from the Communist party earlier in the year, for president. They'll have to sway at least eight Communist deputies to get the 61 votes required to elect Lupu as president. Liberal Democratic Party head Vlad Filat was nominated for prime minister.

The coalition, which consists of the Liberal Democratic Party, Democratic Party, Liberal Party and the Our Moldova Party, won a majority in July elections, gaining 53 of the Parliament's 101 seats. The Communist Party won the remaining 48.

The government of Moldova, Europe's poorest country, has been in disarray since April, when parliamentary elections resulted in a Communist majority amid accusations of widespread vote fraud. One person was killed and more than 300 injured in street clashes between police and protesters.

However, the Communists could not get enough votes to elect a successor to outgoing President Vladimir Voronin. That led to another round of parliamentary elections last month.

The Communists and their party chief Voronin, have controlled Moldova for the past nine years. The party advocates stronger ties with Russia, political distance from neighboring Romania, and a policy of neutrality.

The ruling alliance favors closer ties with the European Union and has named anti-corruption measures, a free and more open media, and pulling the country out of a steep recession as its leading priorities. The Moldovan economy is expected to shrink by nine percent this year.

Moldova is still a largely unknown spot on the map – usually described as the Europe's poorest country and one of it's most corrupt. Miles Ashdown has this postcard about the hidden riches he found there. (07.08.2009)

The OSCE has expressed broad satisfaction with parliamentary elections in the former Soviet Republic of Moldova that saw the country's Communists denied a majority, but said there were still shortcomings in the process. (30.07.2009)