Democratic progress made in Moldova′s pro-West election victory | World | Breaking news and perspectives from around the globe | DW | 30.07.2009

The OSCE has expressed broad satisfaction with parliamentary elections in the former Soviet Republic of Moldova that saw the country's Communists denied a majority, but said there were still shortcomings in the process. 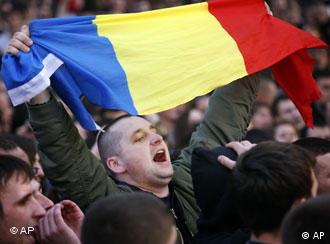 An initial report by The Organization for Security and Cooperation in Europe (OSCE) said Thursday that the elections, the second this year, were "mostly democratic" but added despite some efforts to improve the quality of voter lists, voter registration lacked uniformity and observers identified shortcomings in the accuracy of voter lists on election day.

The OSCE's international election observers also reported that the state-controlled media was often unbalanced in its reporting and that there was evidence of intimidation of voters and obstacles set before the opposition.

Moldova's main television channels failed to provide impartial coverage, favoring the ruling Communist Party both in terms of time and tone, the OSCE said in its report, adding that methods of subtle pressure and intimidation were used by the authorities to control the campaign environment.

Moldovan opposition parties echoed the OSCE's sentiments in the wake of that election claiming the vote was inherently unfair, as the election campaign was conducted with strong Communist party control of major media and regional governments. 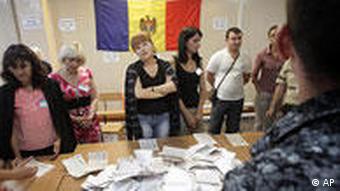 The OSCE said that the election process showed improvements

But the OSCE did concede that the second election Moldova had experienced in the last four weeks was an improvement on previous votes, the last one in July being marred by deadly post-election violence after the opposition accused the Communists of vote rigging.

"The elections in Moldova met many international standards, but the process underscored the need for continued democratic reforms to restore public trust," the OSCE said in a statement.

"I am encouraged by the conduct of these elections. Many OSCE commitments were met, but important challenges remain," added Petros Efthymiou, the head of the OSCE observers, before adding that Moldova had to work more on democratic reforms in order to win the trust of voters.

Initial results from the election showed that Moldova's pro-West opposition had unexpectedly defeated the Communist Party in the tight legislative elections, winning more seats combined than the Communists.

The pro-West opposition, which is pushing for closer ties with the European Union in contrast to the Communists who are far more enthusiastic about keeping friendly links to Russia, Moldova's former Soviet patron, were working to form a coalition after their surprise victory.

The three traditionally largest parties of the anti-Communist opposition – the Liberal Democrats, the Liberal Party and the Our Moldova coalition – together were set to win 40 seats, the central election commission said. 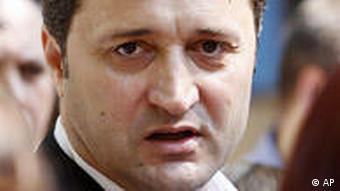 Vlad Filat, head of the Liberal Democrats, said he believed that opposition leaders could put together a coalition. "After eight years of authoritarianism, democratic development is possible in this country," he told reporters. "Democracy and truth have finally been victorious. We fought for this for so long and with many difficulties."

Marian Lupu, whose centrist Democratic Party is a key player in forming a viable government after the election, ruled out any two-party pact with the ruling Communist Party.

"We will not go into a bilateral coalition with the Communist party," said Lupu, whose party took fourth place and is likely to win 13 seats. "I understand that such an alliance will preserve the existing situation in the country – one that is far from good.

"I know the mentality of the Communists. It is impossible to form a coalition with them," said Lupu, whose defection from the Communist Party to the Democratic Party appears to have contributed much to the transformation of Moldova's political landscape.

"Our intention is to contribute to a constructive start, a very active start, a balanced start in line with the Democratic Party style, seeking to form a broad coalition," he said.

Serafim Urechean, the head of Our Moldova, told Moldovan television that his party was willing to begin coalition negotiations, but only if Lupu's former Communist allegiances were truly a thing of the past. "We are ready to work with the Democratic Party if it is definitively separated from the Communist Party," he said. 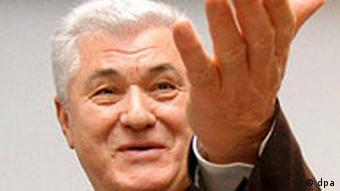 Voronin's reign comes to an end in defeat for his party

The Communist Party, led by strongman President Vladimir Voronin, received by far the most votes in Wednesday's polls, but its share of 45.07 percent of the vote was exceeded by the tally of four main opposition parties combined.

This gives the Communists only 48 seats in the new parliament and its opponents 53 seats, the central election commission said in figures published Thursday, based on 98.3 percent of ballots counted.

The new parliament must also choose a successor to Voronin, who has served out the maximum two four-year terms.

Despite maintaining that the Communists will not be approached to become part of any ruling coalition, the opposition parties will have to call on some Communist support if they are to choose the next president, as a three-fifths majority in parliament is required to choose the head of state.

Wednesday's election comes less than four months after the last polls in which the Communists won about 50 percent of the vote but were accused of fraud, prompting huge numbers of young activists to take to the streets after spreading the word via Internet tools like Twitter and Facebook.

The street protests culminated in the sacking and burning of the parliament building in Chisinau by young rioters, which Russia and Voronin's Communists blamed on interference from Romania.

Less than four months after they last went to the polls, Moldovans began voting on Wednesday in their second parliamentary elections, prompted by violent anti-Communist riots and a bitter political standoff. (29.07.2009)

Moldova's outgoing President Vladimir Voronin dissolved parliament on Monday and set July 29 as the date for an early election after lawmakers twice failed to endorse his choice of successor. (15.06.2009)

The Moldovan Prime Minister, Zinaida Greceanii, has failed for a second time to secure enough votes to become president of the tiny ex-Soviet republic, paving the way for new elections. (03.06.2009)