The leaders of Germany and Denmark met on Tuesday to mark the 50th anniversary of the Bonn-Copenhagen Declarations, a series of agreements which secured the rights of minorities in each others countries. 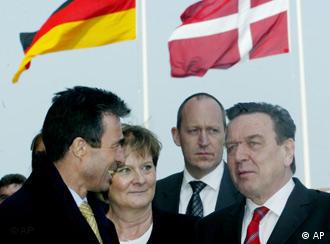 Danish Prime Minister Anders Fogh Rasmussen and German Chancellor Gerhard Schröder met on Tuesday in southwestern Denmark to celebrate the 50th anniversary of the Bonn-Copenhagen Declarations that secures the rights of minorities in their two countries.

The treaties, which were signed by Danish leader H.C. Hansen and his German counterpart Konrad Adenauer on March 29, 1955, still serve as a European model for respectful treatment of minorities.

Numerous conflicts and years of tumultuous relations between the two neighbors, including the war of 1864 -- in which Denmark lost nearly a third of its territory, regained in 1920 -- and World War II, left tens of thousands of Danes stranded in Germany and thousands of Germans in the Scandinavian country.

Minorities left behind in war

The Bonn-Copenhagen Declarations secured the approximately 50,000 Danes living in the northern German region of Schleswig-Holstein and the some 15,000 Germans living in Soenderjylland in southern Denmark the right to use their own language, practice the religion of their native country and be elected into regional and national parliaments through a minority quota.

Natives and minorities in the two countries have lived pretty much in peaceful coexistence since the treaties were signed, but now and then some of the old hostilities resurface.

Controversial success for Danes in election 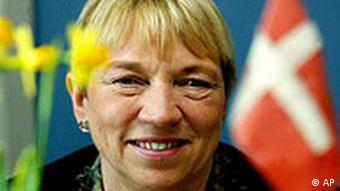 Just last month, controversial elections in Schleswig-Holstein led to criticism of what some people in the region feel is the Danish minority's privileged political status. The Danish minority party SSW, which through the 1955 treaties is exempt from having to win a minimum five percent of votes to secure seats in the regional parliament, was able to land two mandates with only 3.6 percent of the votes.

The conservative CDU Party, which won the February 20 elections, has harshly criticized SSW for its vain attempts to use those two mandates to keep the Social Democrats and the Green Party in power.

In an editorial earlier this month, German daily Frankfurter Allgemeine Zeitung bashed the minority participation rule, accusing German signatory to the treaties Adenauer of "sacrificing a fundamental principal of representative democracy" and calling for the SSW's "privileges" to be revoked.

Declarations a success of civil rights

Despite the tensions, Dieter Paul Küssner, the head of the Danish minority Southslesvigian Organization, insists that the Bonn-Copenhagen Declarations have "contributed to making minority members on both sides of the border feel like full-worthy and equal citizens".

"It took time, 20 to 30 years, before we were seriously respected ... Today we are, and our case should serve as an inspiration to other European countries," Küssner said.

Sorbs Aim for Party of Their Own

The Sorbs -- a Slavonic minority living in the eastern German federal states of Brandenburg and Saxony -- are poised to found a political party. The plan is not without its critics. (March 4, 2005)

German Chancellor Gerhard Schröder’s ruling Social Democrats look set to cling on to power in the northern state of Schleswig-Holstein – despite Sunday‘s drubbing at a regional election there. (Feb. 21, 2005)