Despite the Ebola epidemic, Sierra Leone is back on its feet. The agricultural sector is fully revived and the country is doing all it can to prevent the disease. 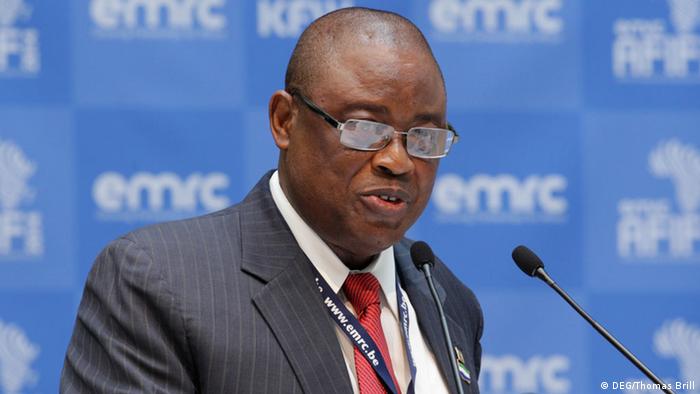 The Ebola epidemic in West Africa, which began in 2013, killed more than11,300 people as it swept through Sierra Leone, Liberia and Guinea. Earlier this year, the World Health Organization declared those three countries free of the disease, but few who experienced it first hand are likely to forget the epidemic. Monty Jones is Sierra Leone's Minister for Agriculture, Forestry and Food Security and visited Germany this week to discuss a new initiative to try and prevent future outbreaks of the deadly virus. He spoke to DW’s Mark Caldwell about the new initiative entailed.

DW. How will this new initiative stop the Ebola virus from spreading?

Monty Jones: Anything that we can do to stop this disease, Sierra Leon will do that and that is the value of this project that. We are trying to identify the source of the Ebola infection in human beings, whether it comes from domestic or wild animals. We hope that if we are able to trace the sources, we will be able to put a stop to this, because the pain that we have gone through, we would not want any country to go through that kind of suffering.

Agriculture accounts for just over half of Sierra Leone's GDP. During the Ebola epidemic, crops went unharvested because of the measures that were put in place to try and contain the disease. Has the agricultural sector now fully recovered?

Today I will say that agriculture has fully recovered. The reason for that, is that the government was able to move fast to get quality agricultural inputs to farmers. If you were not able to plant your field in 2014 and 2015 for one reason or another, then what you probably would have missed is bio seeds. The government was quick to get seeds and fertilizers and distribute them to farmers. We were quick to get machinery and chemicals and distribute them for use by the farmers.  So by 2016 farmers had recovered fully from the Ebola problems. I have been travelling throughout the country looking at production and reckon that the minimum could be 10 percent increase and the maximum could be around 30 percent or slightly more increase in the area under cultivation. But that is not all, we are also expecting may be a 10 percent increase in yield because of the inputs that were given to the farmers. We expect to recover completely from the Ebola crisis by the end of 2016.

One complaint leveled against agribusiness in Africa is that of land grabbing in which local farmers find that their land has been taken away from them following deals with foreign companies and government officials. How much tension is there between local residents and agribusiness in Sierra Leone?

Jones: I think this is an issue that occurs every now and then.  In Sierra Leone it has not been a serious issue until recently when we have seen some tension between land owners and the private sector, but government has always tried to intervene and the tensions have slowed down. I do not see it as a major issue right now in Sierra Leone, but it is a sensitive one and the government is very keen and particular to intervene whenever it occurs.

To solve that problem once and for all, we are looking at a land tenure system. We are coming up with a new policy for land use in Sierra Leone that we believe will reduce that kind of tension.