Researchers from a German university have said countries have only found on average about 6% of coronavirus infections. The real number of infected people globally may have already reached tens of millions of people. 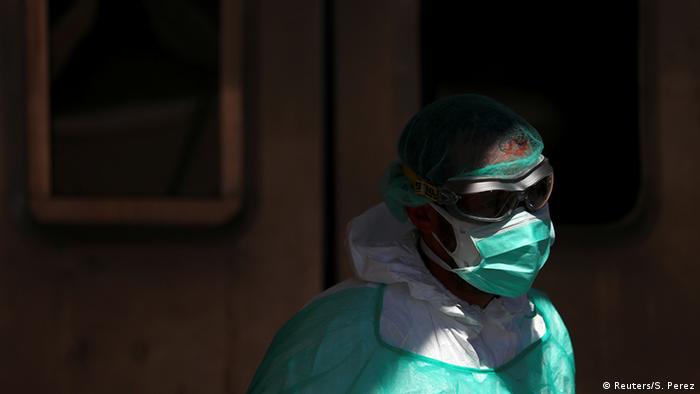 The total number of coronavirus infections is likely to be drastically higher than the figures officially registered by health authorities worldwide, according to a new study.

The researchers looked at the estimates of coronavirus mortality and the time from infection until death to assess the quality of official case records.

According to the German researchers, the data showed that countries have only discovered on average about 6% of all coronavirus infections. They claimed that the true total number of people infected with coronavirus may already have reached some tens of millions of people worldwide.

Read more: Corona confusion: How to make sense of the numbers

"These results mean that governments and policy-makers need to exercise extreme caution when interpreting case numbers for planning purposes," said Vollmer, a Professor of Development Economics at the university.

"Such extreme differences in the amount and quality of testing carried out in different countries mean that official case records are largely uninformative and do not provide helpful information," he warned.

Bommer and Vollmer estimated that on 31 March 2020, Germany was likely to have actually had 460,000 infections. Based on the same method, they calculate that the US probably had more than 10 million, Spain more than 5 million, Italy around 3 million and the UK about 2 million coronavirus infections.

On the same day, the Johns Hopkins University was reporting around 900,000 formally diagnosed and confirmed cases worldwide.

"While the Johns Hopkins data report less than a million confirmed cases globally at the moment this correspondence is written, we estimate the number of infections to be a few tens of millions," the study said.

According to the authors, inadequate and delayed testing may be the reason why some European countries, including Italy and Spain, are experiencing much higher casualty rates (relative to reported confirmed cases) than Germany.

'Just a matter of time'

The researchers called for major improvements in the the ability of countries to detect new infections and then adopt measures for isolating infected patients and tracing contact persons.

If countries failed to do so, "the virus might remain undetected again for an extended period of time and a new outbreak is likely in just a matter of time," the authors warned.