Military Court in Germany Convicts US Soldier in Iraq Murders | Germany | News and in-depth reporting from Berlin and beyond | DW | 21.02.2009

Military Court in Germany Convicts US Soldier in Iraq Murders

A 28-year-old US Army medic has been sentenced by a US military court in Germany to life in prison with the possibility of parole for his role in murdering four Iraqi prisoners in 2007. 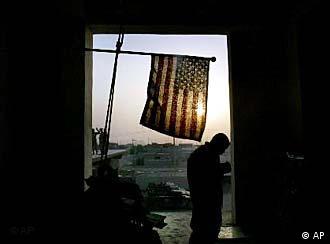 The soldier was convicted of murder and conspiracy to commit murder

The US military court in Vilseck, Germany, on Friday evening, Feb. 20, found Sgt. Michael Leahy guilty of murder for his role in the execution-style killings of four Iraqi detainees.

The nine-member jury convicted Leahy, one of four soldiers charged in the slayings, of murder and conspiracy to commit murder. His rank will be reduced to private and he will be dishonorably discharged from the Army.

Another US soldier, Steven Ribordy, in October was sentenced to eight months in prison for his role in the killings as part of a plea deal.

According to US media reports, the group killed the handcuffed and blindfolded Iraqi prisoners with pistol shots to the head.

US Soldier Seeks Asylum in Germany Over Iraq War

A US soldier is seeking asylum in Germany after deserting to avoid re-deployment in Iraq. The case could have major political ramifications for Germany. (03.02.2009)

Germany Delivered Intelligence to US for Iraq War, Says Report

The German intelligence service played an important role in determining how the United States fought the war in Iraq, a retired US general told a German newsmagazine. Berlin has denied participating in combat operations. (13.12.2008)