Microcredit to support reconstruction after floods | Asia | An in-depth look at news from across the continent | DW | 30.08.2010

Microcredit to support reconstruction after floods

There has been a slight improvement in the flood situation in Pakistan. The southern city of Thatta has apparently been saved from being inundated, and many citizens who fled earlier are returning there. 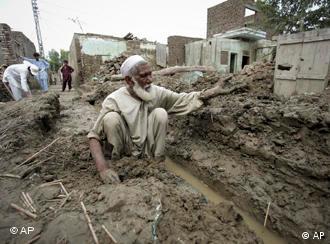 A Pakistani flood survivor rebuilds his house in Nowshera

Slowly, the focus is turning to the giant task of rebuilding the devastated areas. The Pakistani NGO Akhuwat Pakistan has launched an innovative plan to help flood victims in southern Punjab stand on their own feet as soon as possible.

Under the plan by Akhuwat Pakistan, flood-affected families are to receive microcredits in order to create employment opportunities for them. The interest-free loans will come without difficult conditions attached.

The organisation's executive director Amjad Saqib explains: "Look, whatever is happening right now is relief work. People need food, shelter, medicine." But this relief work will be over in one or two months, he adds.

"And then the real challenge will come up - how to rehabilitate all these people! How can they stand on their own feet again? So whereas we from Akhuwat have been continuously engaged in relief work in the field, within two months we want to shift our focus on one of the worst-affected areas, Rajanpur district. Our preparation, fund raising and resource mobilisation are going well, and God willing we'll select 10,000 badly affected families and provide them with interest-free loans, thus enabling them to re-start the businesses they've had to abandon due to this flood."

The flood victims will get between 10,000 and 30,000 rupees (between 92 and 276 euros) per family as an interest-free loan. No security or documents are required, nor will there be any service charges. According to Izhar Hashmi, director of Akhuwat Pakistan, the recipients will be able to buy seeds or raise goats or cattle with the money. They might also open a small shop in their village or buy a donkey cart and start a transport business. With the income generated, they'll have to repay the loans within 30 months. The money will then be free to be distributed again to other needy persons. Akhuwat plans to raise 150 million rupees (almost 1.4 million euros) in donations from Pakistanis for the program. 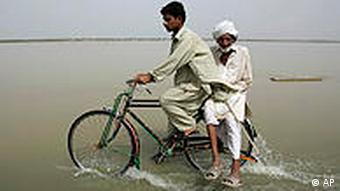 Crossing a flooded road in Punjab province on Monday

"We won't turn Pakistanis into beggars," says Amjad Saqib, "but want to harness their potential to work hard for a better future. They'll rise up on their own and stand on their own feet again."

An alternative approach to microcredit

Akhuwat means "brotherhood" in Arabic. The organisation's philosophy of providing loan-free microcredit is inspired by Islamic teaching which prohibits the charging of interest, but it equally provides loans to non-Muslims, such as members of the Christian minority, relying on the local mosque and church infrastructure.

Akhuwat, which has been working in Pakistan for more than nine years and claims a recovery rate for its loans of almost 100 per cent, is an interesting exception among the growing number of micro-finance institutions worldwide. Recently, criticism has grown of these microcredit groups, as many have been demanding high interest rates, which can become a problem for those who accept their loans. Some development experts have pointed to the Akhuwat model, funded by charitable donations and charging no interest at all, as an alternative way. For Pakistani flood victims, it definitely comes as a welcome support in this time of crisis.

Merkel appeals to donors as German aid arrives in Pakistan

As heavy flooding continues to forces millions of Pakistanis from their homes, a 100-ton shipment of German aid has arrived in the country. A second shipment is to be sent over the weekend. (28.08.2010)

A Website launched in Pakistan uses crowd-sourcing technology to voice the needs of hundreds of flood victims seeking food, water and shelter. It's also helping coordinate the provision of aid in the flood disaster. (27.08.2010)

Hundreds of thousands of people in southern Pakistan have been forced to flee after the swollen Indus river breached an embankment in the province of Sindh. (27.08.2010)