James and Jennifer Crumbley were charged with involuntary manslaughter after their 15-year-old son allegedly murdered four classmates. The pair have been taken into custody after a Detroit-wide manhunt. 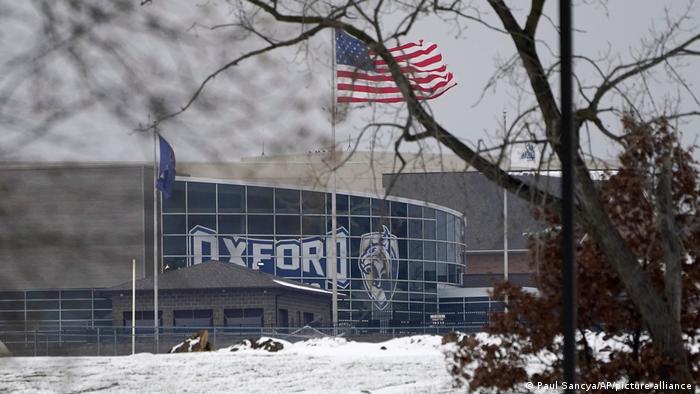 Four students died after the shooting at Oxford High School

The parents of a Michigan teenager accused of murdering four fellow high school students were arrested Saturday, a day after the pair were charged with four counts of involuntary manslaughter in connection with the mass shooting.

James and Jenifer Crumbley entered a not guilty plea to four counts of involuntary manslaughters during an online Zoom hearing.

The alleged shooter's mother sobbed during the trial and struggled to answer the judge's questions. Her husband James shook his head when the prosecutor said their son had full access to the gun.

The judge in the hearing set a bond of $1 million for both of them to be released on bail until the trial.

How did police find the Crumbleys?

A manhunt was launched across the wider Detroit area for James and Jennifer Crumbley, who are accused of buying the gun for their son as a Christmas present and then ignored warning signs that may have prevented the massacre.

Police arrested the couple in the early hours of Saturday while they were hiding in a commercial building in Detroit and took them into custody. A businessman who saw a vehicle linked to the Crumbleys alerted the police, Oakland County Undersheriff Michael McCabe said.

On Friday, their attorney Shannon Smith had said the Crumbleys weren't on the run and had left town earlier in the week "for their own safety."

Smith on Saturday continued to argue that they had not intended to flee, instead accusing prosecutors of "cherry picking" facts to release publicly.

"Our clients are just as devastated as everyone else,'' Smith said.

But Oakland County prosecutor Karen Mcdonald said the couple took $4,000 from an ATM in Rochester Hills on Friday morning.

"These are not people that we can be assured will return to court on their own,'' McDonald said.

Shooter charged as an adult

The 15-year-old now faces several charges as an adult, including murder and terrorism.

"These charges are intended to hold the individuals who contributed to this tragedy accountable and also send the message that gun owners have a responsibility," McDonald said. "While the shooter was the one who entered the high school and pulled the trigger, there are other individuals who contributed to the events on November 30 and it's my intention to hold them accountable as well."

Suspect with his father at time of purchase

Just four days before the school shooting, James Crumbley legally bought the handgun that authorities say Ethan used in the attack that killed four children aged 14 to 17. James' son was with him at the time of purchase, prosecutors said.

"The parents were the only individuals in the position to know the access to weapons,'' McDonald had said Thursday. The weapon "seems to have been just freely available to that individual."

The prosecutor said then that the parents' conduct went "far beyond negligence."

When he heard reports of a shooting at the school, Ethan's father instantly drove home to look for the gun, which was nowhere to be found, McDonald said at a news conference on Friday. Crumbley then called authorities to say he suspected his teenage son may be the individual who carried out the shooting.

While teens have been responsible for several school shootings in the United States, it remains uncommon for a suspect's parents to also face charges.

"We need to do better in this country," McDonald said. "We need to say enough is enough for our kids, our teachers, parents, for all of us in this community and the communities across this nation."

US: Combatting the surge in gun violence

US: Shooting at Tennessee supermarket leaves at least 1 dead

The shooting at a Kroger grocery store has left at least one person dead a dozen people injured, according to police. The suspect behind the shooting is reportedly dead from a self-inflicted gunshot wound.