Mexico votes, as ballots burn in Oaxaca and Guerrero

Protesters have burned ballots, blocked polls and shut down the vote in at least one Mexican town. Thousands of soldiers and federal police have been deployed to guard polling stations, particularly in southern states. 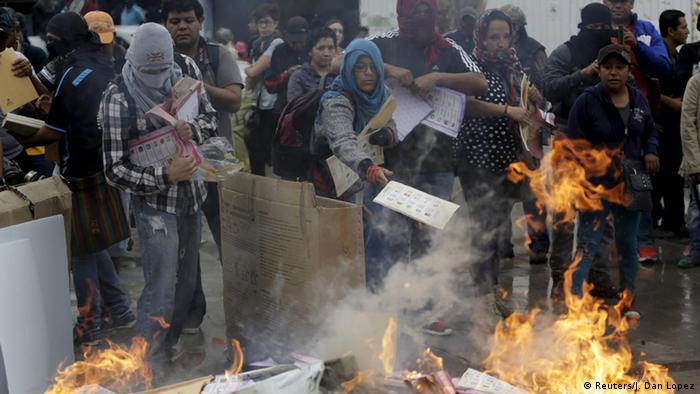 Voting in Mexico City, Pena Nieto acknowledged reports of "isolated incidents" but called it "rather satisfying to know that the great majority of polling stations were installed."

Pena Nieto's neoliberal Institutional Revolutionary Party and its allies expect to maintain a congressional majority despite the protests, various political scandals and a long-running bloody drug war. Election authorities said they had successfully installed "99.95 percent of the 128,704 voting booths" for Mexicans to choose 500 members of the lower house of Congress, about 900 mayors and nine governors.

At least four candidates were murdered in the run-up to the vote, including one running for mayor who was beheaded in March. In Guerrero on Saturday, more than 10 people died when rival factions of a self-defense militia clashed in the village of Xolapa, though authorities suggested that the fighting had arisen from an internal feud unrelated to the elections.

'There won't be elections'

At least three polling stations were prevented from opening after masked protesters and the parents of 43 students allegedly killed by a police-backed drug gang last year seized and burned ballots in Tixtla, Guerrero, canceling the vote in the town of 40,000. The students' parents, along with a loose coalition of teachers' unions and activists, have vowed to prevent the vote until justice is served.

"As long as they don't deliver our sons, there won't be elections," the father of one of the students told Agence France-Presse.

A teachers' union has put pressure on President Pena Nieto to withdraw performance reviews and other educational changes he put in place in 2013. The deployment of federal forces followed daily protests last week by teachers who stormed election offices, burned thousands of ballots and ransacked the headquarters of political parties in the states of Guerrero, Oaxaca and Chiapas. The teachers have also called for a living wage.

Up to 83.5 million of Mexico's nearly 120 million people are eligible to vote. The nationwide voting will run until 2300 UTC, with preliminary results expected at about 0300 UTC Monday.