Mexican officials said Thursday's earthquake was an aftershock from a tremor several days ago. There were no reports of widespread damage. 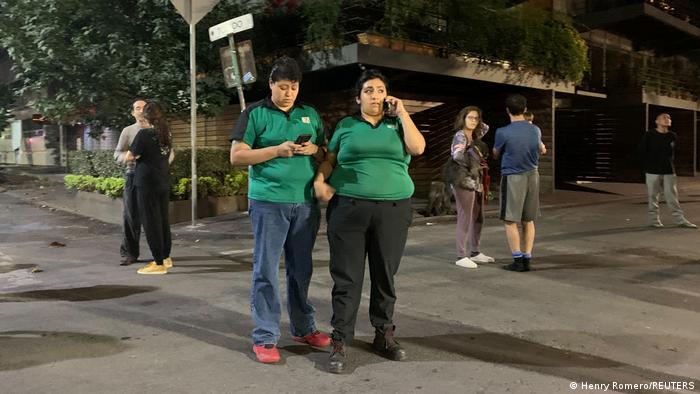 In Mexico City, an earthquake alert was activated, prompting residents to leave their homes

A powerful earthquake in Mexico's state of Michoacan unleashed landslides early Thursday morning and was felt in the nearby states of Colima, Jalisco and Guerrero.

The US Geological Survey said the tremor was centered 31 miles (50 kilometers) southwest of Aguililla at a depth of 15 miles (24.1 kilometers).

The epicenter was not far from a similar quake that occurred on Monday. Mexican President Andres Manuel Lopez Obrador said on Twitter that the quake was an aftershock from Monday's quake.

Mexico's civil protection authorities and the president both said there were no initial reports of damage in Michoacan or the surrounding regions.

However, in Mexico City, hundreds of kilometers away, a seismic quake alert was activated, prompting thousands of people to leave their homes in the early hours of the morning.

Mexico City Mayor Claudia Sheinbaum said one woman died after falling down the stairs, suffering a strike to the head as she stumbled, while a second victim suffered a heart attack.

"People lost their lives in Mexico City, according to the report by Claudia Sheinbaum. In the epicenter area in Michoacan, Colima and Jalisco no such misfortune," Lopez Obrador posted on social media.

Every September 19, a national simulation for earthquakes takes place, a date which marks the anniversary of two of the largest and most destructive quakes in Mexican history, which occurred in 1985 and 2017.

Monday's quake left two dead and ten injured in the western territory of Mexico. In all, 1,000 aftershocks were recorded, with today's being the one of the highest magnitudes.

The 1985 quake resulted in more than 5,000 fatalities after the capital was struck by a magnitude 8.1 tremor.

Another quake on the same date in 2017, with its epicenter inland and far closer to Mexico City than Monday's tremor, caused more than 200 fatalities and some 1,300 injuries.

Mexico is on the so-called Pacific Ring of Fire, an area of volcanic and tectonic activity. It spans several continents, incorporating most of the west coast of the Americas and most of the eastern tip of Asia and some Pacific islands.

The United States Geological Survey reported the quake was of a magnitude 7.0, felt as far away as Mexico City from its epicenter near Acapulco. At least one person died in the state of Guerrero.

President Lopez Obrador announced one death following the quake. The epicenter was some 37 kilometers southeast of Aquila, near the border of the states of Colima and Michoacan and close to the coastline.

The United States Geological Survey reported the quake was of a magnitude 7.0, felt as far away as Mexico City from its epicenter near Acapulco. At least one person died in the state of Guerrero.