Dozens of people have been killed after Tropical Storm Earl caused landslides in the mountainous Puebla state. Ten others were killed in the Gulf coast state of Veracruz. 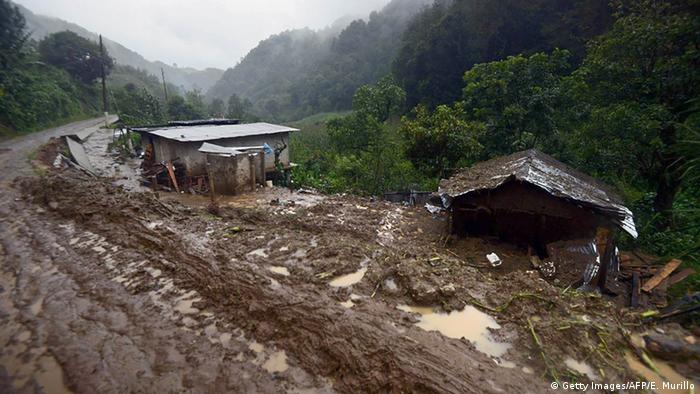 In an interview with ForoTV, National Civil Protection Coordinator Luis Felipe Puente said 25 of the dead were in various parts of the township of Huauchinango and three were in Tlaola, where landslides buried several houses. Officials said more than half of those killed were minors.

"It is a tragedy what has happened to our people in Huauchinango," said the town's Mayor Gabriel Alvarado.

The Puebla government said one town received a month's worth of rain in just 24 hours, and in one area, a hill swept down on an adjacent village, killing nearly a dozen residents.

Several highways were ripped up, two bridges collapsed and power was knocked out in several towns.

Governor Rafael Moreno Valle pledged to rebuild damaged structures and posted on Twitter photos of himself walking in mud and residents helping in cleanup efforts.

Some 200 people were left homeless in Puebla by the rains, while in the eastern state of Veracruz, rivers swelled with rainwater and dozens of families were evacuated. Ten people were killed in Veracruz Saturday by mudslides.

Heavy rain continued throughout the area, leading officials to close a section of the main federal highway connecting Mexico City to the region.

Tropical storm Earl, which originated with hurricane force near Belize Thursday, was downgraded to a low-pressure tropical system on Saturday, with winds reaching only 55 kilometers per hour.

Meanwhile, the US National Hurricane Center said more severe weather, from Tropical Storm Javier, was possible as it formed off Mexico's Pacific Coast.

Heavy rains of between 10 to 20 centimeters (4 to 8 inches) were expected, along with high winds, forecasters said.

Hurricane Earl has made landfall in Belize. It was expected to dump heavy rains and likely cause flooding and damage as it makes its way across Central America and southern Mexico. (04.08.2016)