Preliminary results suggest President Lopez Obrador's Morena party has lost its absolute majority. The elections were marred by violence, with dozens of candidates killed ahead of the vote. 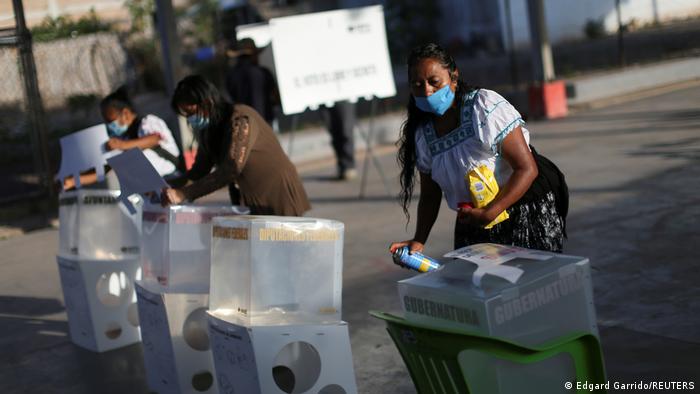 The vote for a new lower house of Congress, state governors and local legislators was seen as a referendum on Lopez Obrador's reform agenda.

Mexicans cast their ballots for over 20,000 positions. Up for grabs were all 500 seats of the lower house of parliament, 15 of Mexico's 31 governorships, almost 2,000 mayorships and about 14,000 seats on local councils.

What are the preliminary results?

A preliminary estimate by the National Electoral Institute (INE) after Sunday's elections put Lopez Obrador's ruling coalition on course to win between 265 and 292 of the 500 lower-house seats.

It means he will fall just short of the two-thirds majority he managed to muster in the first half of his term. His Morena party will now have to rely on its allies the Workers Party and Green Party.

Lopez Obrador appeared to acknowledge that Mexicans had failed to give him a ringing endorsement, despite the fact that he managed to cling to a majority.

"You voted for two different and opposed plans, above all in the federal election,'' he said, underlining that his coalition must do more to help the poor.

"Those for the transformation plan are going to have the majority in the Chamber of Deputies and this means guaranteeing the sufficient budget for the most in need.''

The previous two-thirds supermajority in the lower house of Congress allowed Lopez Obrador to amend the constitution without negotiating with his opponents.

Mexico's main opposition alliance of the center-right PRI, PAN and the left-wing PRD were weakened after Lopez Obrador's 2018 landslide victory. They are now projected to secure between 181 and 213 seats.

This election cycle has seen record criminal violence. At least 89 politicians, including 35 candidates, and dozens of their relatives and associates have been killed, according to figures from the consulting firm Etellekt. In another instance, according to Reuters news agency, a man threw a severed head at a voting station in the border city Tijuana.

A test for Lopez Obrador

Sunday's vote was viewed as critical to Lopez Obrador pushing through reforms under his "Fourth Transformation" plan.

The future of the left-wing populist's agenda was described as hinging on whether voters would punish him for issues such as his handling of the coronavirus pandemic.

Mexico has been one of the countries worst affected by the COVID-19 pandemic.

Mexico works to develop its own vaccine

Nonetheless, Lopez Obrador has enjoyed approval ratings of around 60%.

Much of his popularity is thanks to his social welfare programs, but critics accuse him of a tilt toward authoritarianism with attacks on the judiciary and the National Electoral Institute.

Mexicans are heading to the polls in one of the biggest elections the country has ever seen. Analysts say the vote is a test for the president, and for democracy. DW has an overview.