The former CEO of state-run oil giant Pemex, Emilio Lozoya, is wanted on corruption allegations. One of Mexico's most well-known businessmen has also been arrested in connection with the case. 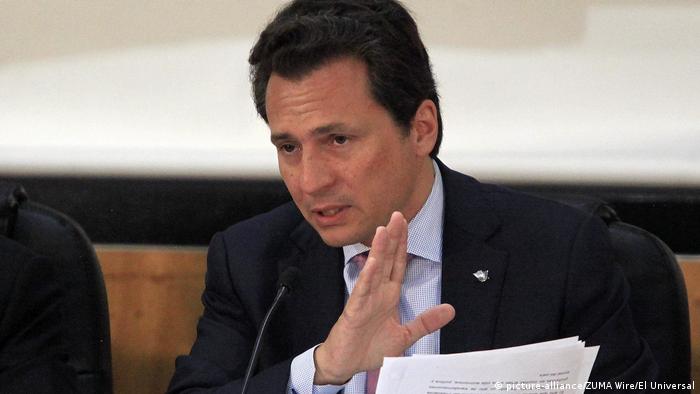 Mexican authorities on Tuesday issued an arrest warrant for the former chief of state-run oil firm Pemex, as one of the country's top businessmen was arrested in Spain in connection to an alleged corruption scandal.

Emilio Lozoya, a former adviser to ex-President Enrique Pena Nieto and head of Pemex from 2012 to 2016, is wanted for alleged bribery, tax fraud and other crimes.

The arrest warrant was issued by the federal Attorney General's Office as authorities raided Lozoya's home in Mexico City while he was not there, his lawyer Javier Coello said in an interview with Milenio Television.

Meanwhile, Alonso Ancira, the head of steelmaker Altos Hornos de Mexico, was arrested in Spain on Tuesday on a Mexican arrest warrant alleging he defrauded the state-owned oil company.

The Finance Ministry's money-laundering czar Santiago Nieto said the allegations related to bribes paid in connection with Pemex's $475 million (€425 million) purchase of a fertilizer plant from Ancira's company Altos Hornos de Mexico in 2015. The government says the fertilizer plant is valued at only $50 million.

Nieto said the case against Ancira and Lozoya also involved Brazilian construction giant Odebrecht, which has admitted to paying out millions of dollars in bribes to government officials across Latin America.

The so-called Car Wash investigation against Odebrecht has led to many arrests across Latin America, but none so far in Mexico.

The steps against Lozoya and Ancira are some of the biggest yet taken by President Andres Manuel Lopez Obrador since he took office in December vowing to fight corruption.

Nieto had been a corruption investigator in former President Enrique Pena Nieto's administration, but was sacked in 2017 while investigating Lozoya.

The corruption czar reopened the case when he took up his new position in Obrador's new administration.

Mexico's environment minister has resigned after ordering a flight to delay its departure by 40 minutes, saying no one should have special privileges. She is the second top official to step down in less than a week. (26.05.2019)

Anabel Hernández is the fifth person to receive the DW Freedom of Speech Award. On May 27, the ceremony will be held at the DW Global Media Forum in Bonn. British journalist Misha Glenny will give the laudatory speech. (19.02.2019)

Mexican officials said Thursday's earthquake was an aftershock from a tremor several days ago. There were no reports of widespread damage.