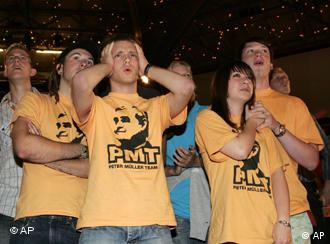 The Christian Democratic Union (CDU) seems likely to lose control of governments in Saarland and Thuringia after state elections Sunday, according to projections from the ARD and ZDF public television networks. But the CDU still remains the largest party in both states.

"The vote losses in Thuringia and Saarland are painful," CDU General Secretary Ronald Pofalla said Sunday after the polls closed. 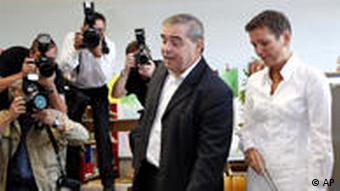 The losses at the state level could be a blow for Chancellor Angela Merkel, who's campaigning for a second term in federal elections to be held September 27.

"The Saxons have voted wisely," Tillich said Sunday evening. "I accept this responsibility with gratitude but also with respect for the will of the voters."

Next door in Thuringia, incumbent CDU premier Dieter Althaus could lose office after his party drew only about 31 percent of the vote compared to 43 percent five years ago.

Althaus saw his popularity dip after he was found guilty of involuntary manslaughter for crashing into and killing a 41-year-old woman on a ski slope in Austria on New Year's day.

He could form a coalition with the center-left Social Democratic Party (SPD), mirroring the current national government. Alternatively, a coalition between the SPD, the far-left Left party and the environmentalist Green party is also possible. 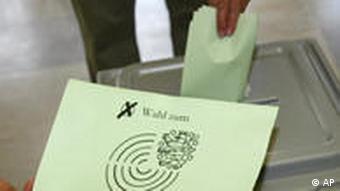 In the western German state of Saarland, the CDU had ruled alone after pulling in 47.5 percent of the vote in 2004. Projections from Sunday's election say the party will receive just 35 percent of the vote, which could lead to an SPD, Left Party, Green coalition as in Thuringia.

If the Left party enters a coalition in the Saarland, it would be the first time the party, which is composed of former East German communists and disaffected former SDP members, joins a government in western Germany.

Given the Left party's ties to the former East German communist party, the SPD has been loath to enter coalitions with the party. In order to reassure potential voters ahead of next month's national election, SPD head Franz Muenterfering ruled out Sunday night an alliance between the two parties on the national level.

Sunday's results were a faint ray of hope for the SPD, which has struggled to capture the imagination of voters and has reached historic lows in opinion polls. Despite losing its role in the Saxon government, the party seems likely to gain power in Saarland and Thuringia. 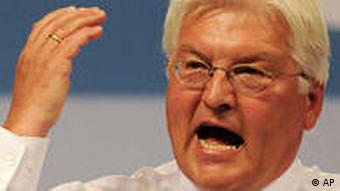 The SPD's Steinmeier spoke of a "good election Sunday"

"I have heard many time in the last few weeks that the federal election is over. This evening shows that that was wrong," Foreign Minister Frank-Walter Steinmeier, the SPD's candidate for chancellor, said.

"The Social Democrats now have the aura of a winner, something they will need for the coming weeks," said Karl-Rudolf Korte, a political scientist at Duisburg-Essen University. "It could mean a turning point in the election campaign."

Merkel's preferred coalition partner, the pro-market Free Democratic Party also made gains Sunday. Saxon premier Tillich is likely to form a coalition with the Free Democrats after projections showed the party pulling in over 10 percent of the vote. But a CDU-FDP coalition was blocked in the other two states holding polls Sunday.

"We're the winners of this evening," FDP chief Guido Westerwelle said on Sunday evening. He said the results, which may lead to left-leaning coalitions in Thuringia and the Saarland, should be considered "a warning shot for the entire republic."

The far-right extremist NPD party failed to gain seats in the Thuringia parliament. The NPD, which is under surveillance for its anti-immigrant message, managed to hold onto its seats in the Saxon parliament, though its share fell to about 5 percent, down from over 9 percent five years ago.

Nearly 20 years after the fall of Berlin Wall, the former ruling party of East Germany made big gains in Sunday's regional elections and is poised to enter governments in both halves of the country. (30.08.2009)

DW-RADIO on the Left party's successes in Sunday's regional polls