Merkel urges social spending cuts in bid to plug deficit | Germany | News and in-depth reporting from Berlin and beyond | DW | 05.06.2010

Chancellor Angela Merkel says social welfare spending should be cut as Germany looks to dramatically reduce its budget deficit. However, political allies have said that tax hikes would be preferable. 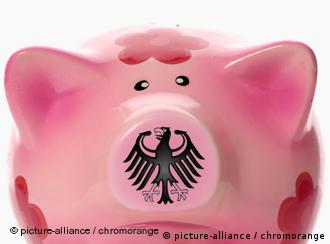 The cabinet is looking to balance its budget and cut debt

German Chancellor Angela Merkel said that she would prefer to cut social welfare rather than raise taxes, as the country looks to balance its budget.

Merkel spoke on Saturday, the day before a two-day cabinet session aimed at reducing the government's public spending deficit.

Making her comments after meeting Russian President Dmitry Medvedev, she said she did not favor tax hikes or increased social welfare premiums to help plug the gap.

In its enthusiasm for fiscal discipline within the EU, the German government is promising to dramatically reduce its deficit.

"It's vital that we readjust the balance between investment in the future and social welfare handouts," said Merkel.

"That cannot just be done by simply increasing the revenue side. It has to happen by making the structures of social security more efficient," she said. 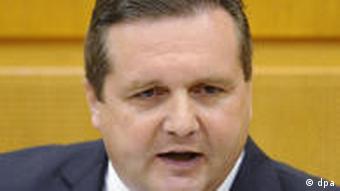 Merkel's comments contrast with those of political allies such as Hans-Peter Friedrich, a senior legislator with Bavaria's Christian Social Union. Friedrich has suggested that income taxes on high earners could be increased.

In an interview with the German newspaper Bild am Sonntag, to be published Sunday, Stefan Mappus, premier of the state of Baden-Wuerttemberg and a member of Merkel's Christian Democrats, said sales taxes could be raised on certain consumer products that are currently taxed at a low rate.

Germany had a budget deficit of more then 86 billion euros ($103 billion) this year. The government aims to cut at least 10 billion euros each year until 2016.

The European Commission is looking for ways to stop its members from overspending. With most eurozone members running budget deficits over the bloc's prescribed limit, Brussels wants to balance the books again. (14.04.2010)

The German government released its proposal for the country's next national budget on Wednesday. It is expected to push the budget deficit to record high levels. (16.12.2009)

New data released a month ahead of the federal election shows the economic crisis has left Germany with a gaping budget deficit. But there are increasing signs that economic recovery may be just around the corner. (25.08.2009)