Merkel to European Parliament: ″Europe′s Soul is Tolerance″ | Europe | News and current affairs from around the continent | DW | 17.01.2007

In a speech to the EU parliament in Strasbourg, Angela Merkel spelled out her goals for Germany's presidency. She stressed the need for progress on an EU constitution but also the fight against religious extremism. 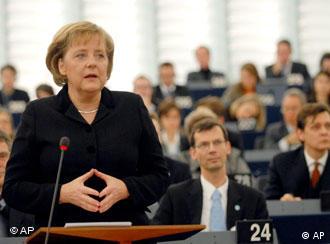 Merkel emphasized both Europe's stengths and its weaknesses

Ahead of the address, EU watchers were most curious about what the German chancellor would propose to end the stalemate over the bloc's proposed constitution, which failed to pass national referenda in France and the Netherlands last year. But Merkel began her speech by stressing diversity as a core European value, saying the EU had to be vigorous in defending its freedoms.

"Tolerance," Merkel said in one of the speech's central lines, "is the soul of Europe." Among the liberties in need of protection, she cited freedom to voice opinions that upset others, freedom to believe or not to believe in religion and freedom of artistic expression.

"Europe," she said, "should never have the slightest understanding for intolerance, for violence by right-or left-wing extremists or violence carried out in the name of a religion."

"Tolerance," she added, "digs its own grave, if it does not defend itself against intolerance."

Such remarks could hardly have failed to remind listeners of the threat of Islamist terrorism as well as last year's controversy over Danish caricatures depicting the prophet Mohammed, which some Muslims found offensive.

"Failure would be a historic mistake" 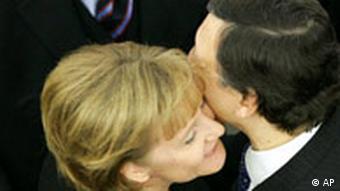 Merkel promised to present a plan to end the deadlock over the EU constitution by the end of Germany's presidency this June. But she did not specify what form a proposed solution might take, other than to say that the bloc needed "clear descriptions about the authority of the EU and of the national states."

Eighteen member states have ratified the constitution, and EU experts think that Germany will negotiate with the remaining nine about what would have be removed from the treaty for it to be passed, preferably without national referenda.

Merkel called for the issue to be resolved before the next EU parliamentary elections in 2009, warning that failure to do so would be "a historic mistake." She also stressed the need for the EU to have a foreign minister.

"The time for deliberation is over," she said. "We have to reach new decisions."

Closer Ties to the US and Less Bureaucracy 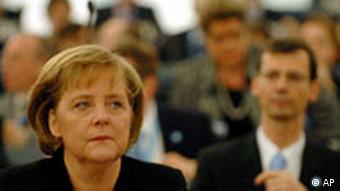 Merkel said the EU needed to cooperate more with the US on the issue of climate change in the efforts to achieve a global environmental treat by the year 2012.

"Access to energy and protecting the climate," she said, "are two challenges affecting all of humanity in our age."

She also said the bloc should strength its economic ties with the US. America, she said, was still the EU's most important trading partner, adding "a common trans-Atlantic is very much in European interests."

In addition, Merkel stressed the need to get rid of bureaucracy, saying it was crucial to creating jobs -- an issue very much on people's minds here in Germany.

"One thing is certain," she said, "a slow-paced, bureaucratic and quarrelling Europe will not be able to cope with the tasks that have to be dealt with."

Germany's Angela Merkel said reminding Europeans of their common values is the key to creating a feeling of unity in the 25 nation bloc. (15.11.2006)

Germany took over the rotating EU presidency on Jan. 1. DW-WORLD.DE has prepared a dossier with background information on pressing issues that are likely to come up while Berlin leads the 25-nation bloc. (12.01.2007)