Merkel, Erdogan to open CeBIT trade fair amid tensions | Germany | News and in-depth reporting from Berlin and beyond | DW | 27.02.2011 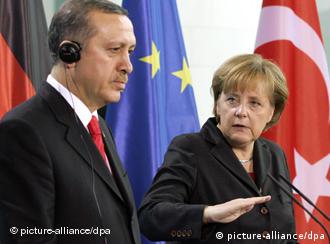 Turkey is the official partner country at this year's CeBit.

Erdogan kicked off his visit on Sunday with a speech to a crowd of 10,000 mainly Turkish residents living in Germany, at Düsseldorf's ISS Dome indoor arena. He pledged them support and said that, while Turks living in Germany should integrate, they should not be forced to assimilate and lose their culture.

"I say yes to integration. We must integrate into society," he said before adding, "No one should be able to rip us away from our culture. Our children must learn German but, first, they must learn Turkish."

In an interview with German daily Rheinische Post ahead of the visit, Erdogan added that policies aimed at encouraging ethnic Turks to speak German as their mother tongue and give up Turkish culture were a "violation of international law." 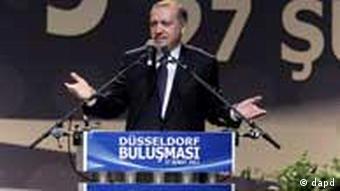 Erdogan called for integration, not assimilation

Erdogan also repeated his call for aid in allowing Turkey to join the European Union. Merkel has until now advocated a "privileged partnership" with Turkey but has staunchly opposed the country gaining EU membership.

"The Turkish people expect Germany to take the lead role in the EU's membership negotiations with Turkey," Erdogan said.

Erdogan claimed Merkel was stalling Turkey's membership talks with the EU "for purely political reasons," and that the delay was a tactic largely aimed at keeping German voters happy.

"Never before have such political hurdles been put before an [EU] accession country," Erdogan said.

Meanwhile, Volker Kauder, head of the parliamentary faction of Merkel's Christian Democrats, told the Rheinische Post he did not want to see any continuation of Turkey's accession talks "as long as Turkey does not guarantee full freedom of religion."

He added that that "included allowing Greek Orthodox Christians to train priests in Turkey."

Merkel's predecessor, former Chancellor Gerhard Schröder, meanwhile sided with Erdogan on the issue of Turkish EU membership in an interview with the newspaper Hannoversche Allgemeine Zeitung.

"All this talk of offering Turkey a meaningless privileged partnership instead of EU membership must end," said Schröder, who was Germany's chancellor from 1998 to 2005.

Schröder, set to meet with Erdogan early Monday, stressed it was in Germany's own interest to allow Turkey into the EU, as Germany was Turkey's biggest trade partner.

In a brief visit to Turkey, French President Nicolas Sarkozy has reaffirmed his stance against the country's EU membership ambitions. Turkey has insisted membership remains a priority. (26.02.2011)

Turkish Cypriots have staged an unprecedented protest against austerity measures being enforced on them by Ankara. The Turkish prime minister said the reaction from the Turkish Cypriots was "outrageous." (09.02.2011)