German Chancellor Merkel and Polish Prime Minister Tusk have vowed to help Ukraine, beginning with the swift signing of an EU association agreement. They also said they were preparing more sanctions against Moscow. 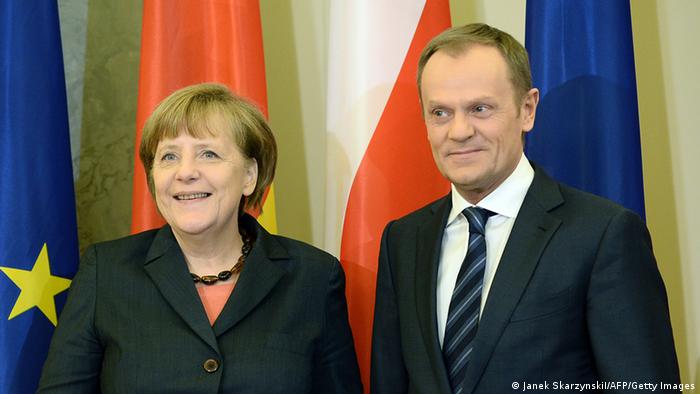 Speaking at a press conference in Warsaw on Wednesday, German Chancellor Angela Merkel and Polish Prime Minister Donald Tusk discussed their common stance on the political crisis in Ukraine, which threatens to worsen in coming days. A controversial referendum is due on Sunday among residents of Ukraine's southern peninsula, Crimea on whether the region should become part of the Russian Federation.

Western leaders have expressed concern over the deployment of presumed Russian troops to the Crimean peninsula as Ukraine's interim government based in Kyiv attempts to restore stability after the ouster of President Viktor Yanukovych in late February.

Kyiv is also gearing up for May 25 elections. Russian President Vladimir Putin's stance on Crimea has reignited fears of undue influence from Moscow - last seen during the Soviet era - and has split public opinion over the country's future with the EU.

"We are both of the opinion that it would be good and useful to sign the association agreement as quickly as possible," the Polish premier added, saying that it would be the "most efficient help" they could offer the transitional government in Kyiv protection.

The signing would likely take place next week when the European Council meets again, the German chancellor and Polish prime minister told reporters.

The two leaders also said that they had discussed forming an assistance program aimed at supporting Ukraine while it rebuilts its various sectors. German Chancellor Merkel said they would be focusing on areas Kyiv specifically requested help for, such as rebuilding the country's finance sector by sending in outside experts. She declined to provide further detail.

Referring to the timeline of bringing Russia to the negotiating table with Ukraine, German Chancellor Merkel said that time was running out for the current offer of setting up a contact group to mediate. Berlin had no intention of taking military action against Moscow. However, it, like the rest of the EU would not simply "avoid conflict."

"Almost a week ago we said if [the proposal of a contact group] wasn't successful within a few days, we'd have to consider a second stage of sanctions," Merkel said.

"Six days have gone by since then and we have to recognize, even though we'll continue our efforts to form a contact group, that we haven't made any progress," she added, saying that the next stage sanctions would include asset freezes and travel bans on individuals. They could levied as early as Monday when the European Council next meets.

Chancellor Merkel indicated that they had begun discussions, but that individual companies would have to be brought together to solve the problem of forming a common energy market, as the German government itself did not buy natural gas and oil.

Earlier this week, the Polish premier raised concerns over Germany's willingness to take a tougher line against Moscow given that it depends on Russia for roughly 40 percent of its natural gas.