Memorial for Gays Persecuted by Nazis Opens in Berlin | Germany | News and in-depth reporting from Berlin and beyond | DW | 26.05.2008

German politicians will dedicate a memorial in Berlin this week to the tens of thousands of homosexuals persecuted during the Nazi regime. Gay activists say the memorial is long overdue. 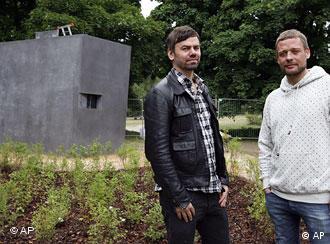 The memorial and its creators

Seventy-five years ago Nazis launched a series of raids and public book burnings aimed at homosexuals. It was the start of Adolf Hitler’s crusade against homosexuality which saw an unknown number of gays arrested, tortured and murdered by the Nazis.

The subject of Nazi persecution of homosexuals has long been swept under the carpet. Yet a new memorial which opens Tuesday, May 27, will bring the past persecution and ongoing struggles of homosexuals to be accepted in society to the heart of the German capital. 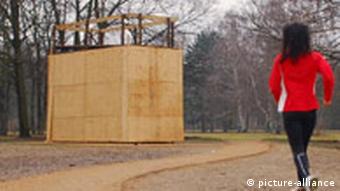 The memorial will be officially unveiled this week

The homosexual memorial will consist of a grey rectangular block some four meters (13 feet) tall. One side will have a small opening through which viewers will see a black and white art film scene of two men kissing.

"A simple kiss could land you in trouble," says the text which accompanies the memorial.

The memorial was designed by the Danish-Norweigan artistic duo Michael Elmgreen and Ingar Dragset.

The memorial has a prominent place in Berlin's Tiergarten park, half a block from Brandenburg Gate. The monument sits across from the Jewish Holocaust Memorial. Originally it was debated whether homosexuals should be included in the larger memorial before the decision was made to give homosexuals their own monument. But the design corresponds to the Holocaust Memorial's field of steles, a series of concrete blocks of varying sizes.

While the Nazi persecution of the Jews is well known, for many years there was little public acknowledgement of Nazi atrocities towards homosexuals. Estimates put the number of homosexuals arrested by Nazis at about 54,000 with 7,000 being killed in concentration camps.

"It is not easy for a gay man to live in this country and this society. It's important to remember that this society punished homosexuality for 20 years after National Socialism ended," said Günter Dworek of the Federation of Gays and Lesbians in Germany (LSVD), a driving force behind the project. 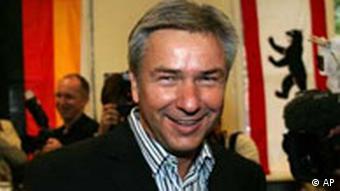 Homosexuality remained illegal in Germany until 1969 and was only formally decriminalized in 1994. It wasn't until 2000 that Germany's parliament first passed a resolution acknowledging discrimination had occurred, Dworek said. The decision to fund the memorial, which cost 450,000 euros ($710,000), happened three years later.

The city's current mayor, Social Democrat Klaus Wowereit, announced shortly before taking office seven years ago that he is gay. Wowereit's legendary outing has given many others courage, Dworek said.

"That opened a lot of people's eyes. You cannot simply assume that politicians who already have a career behind them, like Klaus Wowereit, are by nature heterosexual," Dworek said.

Germany also has a law which allows same-sex couples to register their partnerships. Yet many activists would like to see more, including anti-discrimination laws. Neo-Nazi violence is still a very real threat, said Albert Eckert, head of the gay holocaust memorial committee.

"But at last we have a monument to those who suffered and died under the Nazis," Eckert said.

A tribute to Hirschfeld 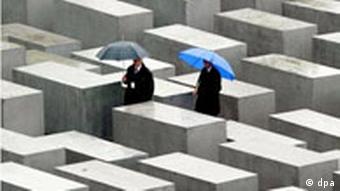 It is similar in style to the Holocaust Memorial

Eckert said he was also happy that the dedication was close to the birthday and death day of Magnus Hirschfeld, who died in exile in southern France on May 14, 1935.

A Jewish homosexual, Hirschfeld was a medical doctor who dedicated his life to the scientific study of homosexuality and lobbied the German government to repeal laws which outlawed gay sex. The word "transsexual" was coined by Hirschfeld to describe the phenomenon that he argued was a natural extension of human sexuality.

For his work, the Nazis targeted Hirschfeld as an example of decadent Bolshevistic/Jewish influence infecting the purity of the German people, luring the Aryan race into impure and destructive perversity. His institute was ransacked and his books were burned in rallies on May 10, 1933.

It wasn't long before gay men were being rounded up and sent to mental hospitals or concentration camps.

"We have no idea how many thousands died in concentration camps because many were also Jewish or were Communists. We know that many were left in prison after the war when post-war courts upheld the Nazi jail sentences against them," Eckert says. "Anyone who was gay was automatically a criminal. This monument is for all of them." 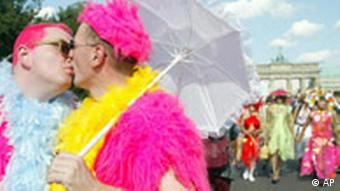 A kiss can be a political statement

The parliament decided on December 12, 2003 to fund the homosexual memorial. It was a nice birthday present for the Green Politician and well-known Gay activist Volker Beck who turned 43 that day.

Beck felt the memorial was especially important because the laws used to prosecute homosexuals continued long after the Nazis had been defeated. And persecution still exists in many countries today, making the memorial as important as ever, Beck said. He cites 80 countries which criminalize homosexual acts between consenting adults and 12 where the death penalty can be handed down.

Beck believes Germany's memorial "sends an important signal that in this country, where in the past [homosexuals] were also systematically persecuted, we now have constructed a symbol against this human rights violation."

But homosexuals are still not fully accepted in society, Beck said. He worries about the refusal of some conservative Christians and Muslims to accept homosexuality. Beck said he doesn't have any problem with the memorial's design, which has come under criticism, particularly from women. The first scene will portray men kissing, but later it will show women.

Dworek said he is "downright happy" with the memorial's design and likes the idea that the kissing scene will switch every two years.

"This will keep the memorial fresh. There is always be something new," Dworek said. "It will be a dynamic memorial."

Berlin renamed a stretch of the Spree River in honor of a gay-rights activist persecuted by the Nazis in the 1930s as the city's biggest hospital opened an exhibition devoted to the sex researcher. (07.05.2008)

As Berlin Mayor Looks to Own Political Future, Scrutiny Grows

Berlin Mayor Klaus Wowereit's recent memoir has ignited discussion about his future political ambitions. The book has moved many to take a closer look at a politician known as much for his partying as his policies. (01.10.2007)

DW-TV: The Artistic Duo Behind the Homosexual Monument to Nazi Victims