Berlin Pays Tribute to Gay-Rights Activist Persecuted by Nazis | Germany| News and in-depth reporting from Berlin and beyond | DW | 07.05.2008

Berlin renamed a stretch of the Spree River in honor of a gay-rights activist persecuted by the Nazis in the 1930s as the city's biggest hospital opened an exhibition devoted to the sex researcher. 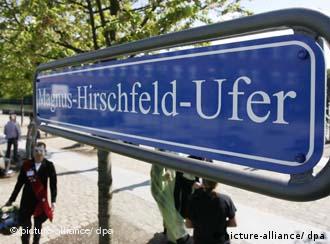 A stretch of the Spree River in central Berlin was named after gay-rights activist and sexual researcher Magnus Hirschfeld in a dedication ceremony on Tuesday, May 6.

On the same day 75 years ago, the Nazis plundered his offices and later burned hundreds of his books.

Hirschfeld had founded the world's first institute dedicated to fighting discrimination against homosexuals. He went into exile in France and died there in 1935.

The stretch of river bank named after Hirschfeld is near his former institute.

According to Germany's Lesbian and Gay Association (LSVD) and the Mitte district of Berlin, where "Magnus-Hirschfeld-Ufer" is located, a bronze monument to Hirschfeld will also be erected along the river.

The Charite hospital also commemorated Hirschfeld with an exhibition which opened on Tuesday at its Medical Historical Museum. Called "Sex Burns," the exhibition focuses on Hirschfeld's work and his persecution by the Nazis.

The tributes to Hirschfeld are "a clear acknowledgment for gays that persecution has taken place and that reparation is necessary," said the head of Germany's Lesbian and Gay Association, Alexander Zinn, said at the dedication ceremony.

"That is a first step in the right direction," he said.

The Nazis declared homosexuality an aberration.

A German Christian youth festival accused of discriminating against homosexuals and women has been disrupted by protests and its Web site hit by hackers. That it received money from the German government has some angry. (02.05.2008)