Donald Trump reportedly "raged" at his staff when he saw Melania's TV set to CNN instead of Fox News on Air Force One, reported The New York Times. Mrs Trump can watch "any channel she wants," her spokeswoman said. 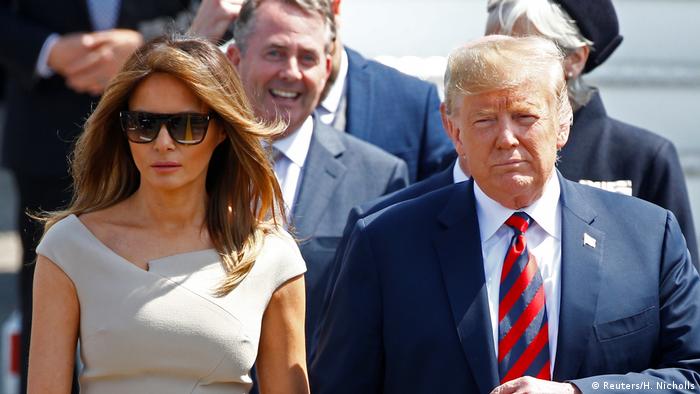 The US first lady's office fired back at a report that US President Donald Trump was upset that Melania Trump's television was pre-set to CNN instead of Fox News on board Air Force One during the couple's trip to Europe.

According to the The New York Times, the president "raged" at his staff for violating a rule that states all trips on Air Force One should begin tuned to Fox News.

Mrs. Trump's spokeswoman, Stephanie Grisham, dismissed the report, saying reporters should focus on other issues, such as initiatives Mrs. Trump wants to highlight, like her anti-bullying programs and raising more awareness of babies born with drug dependency.

Grisham said that Mrs. Trump watches "any channel she wants." She also brushed off questions about a recording of President Trump and his former personal lawyer discussing an alleged extramarital affair he had with a Playboy model in 2006.

"Seems kind of silly to worry about what channel she watches on TV (any channel she wants btw) or if she heard some recording on the news," Grisham wrote in a statement, using an abbreviation for "by the way."

The New York Times report pointed out that the US leader is increasingly surrounding himself with selected information.

At a veterans' convention in Kansas City on Tuesday, Trump told participants: "Stick with us. Don't believe the crap you see from these people, the fake news."

"What you're seeing and what you're reading is not what's happening," he added.

Who does Europe call if it wants to call America?

As EU Commission President Juncker meets US President Donald Trump at a White House with an ever-changing lineup of top officials, European diplomats are still trying to figure out how to get things done in Washington. (25.07.2018)