Each year, 45,000 tons of medicinal plants are used in Germany -- more than in any other European country. But this booming business also creates problems for species preservation. 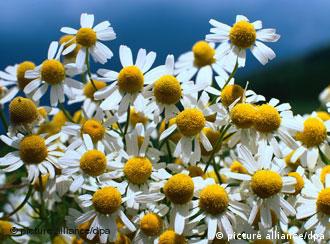 Chamomile is a perennial favorite among Germans

Drugs made from medicinal plants have become ever more popular among doctors and patients in Germany in recent years. Around 75 percent of customers in German pharmacies reach for a natural product when they buy non-prescription medications. In 2006, so-called phytopharmaceuticals accounted for around 2 billions euros ($2.9 billion) worth of revenue, or about a third of the total revenue in non-prescription medications. That translates into a high demand for the raw materials for these products -- medicinal plants and their leaves, flowers, roots, and seeds. 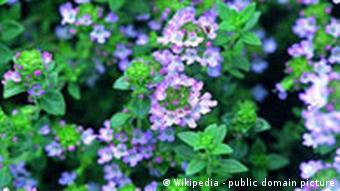 Pharma Wernigerode, one of the largest pharmaceuticals companies in eastern Germany, processes around a dozen medicinal plants, including five tons of chamomile and one ton of thyme annually. In total, 45,000 tons of medicinal plants are consumed in Germany each year, making it the market leader in Europe. According to statistics from the Federal Agency for Nature Conservation (BfN) around 1,500 types of plants are traded in Germany, in larger or smaller amounts.

Schippmann says that for this reason Germany has a special responsibility when it comes to protecting medicinal plants. Excessive harvest and unregulated trade pose a threat to the existence of 4000 medicinal plants worldwide. In Europe, around 150 types of plants are in danger of extinction.

Primrose and sundew, for example, are protected plants in Germany, but in Southeast Europe and Spain, the collection of these plants is unregulated. Entire stocks are on the brink of disappearance.

For around a decade now, the BfN has been working in cooperation with the World Wildlife Foundation on a comprehensive protection plan for medicinal and aromatic plants. Growing them industrially is not an option, says Schippmann. In many cases, it's either impossible or requires too much effort to domesticate the plants, and there is no guarantee that this process would be sustainable.

Human aspect not to be ignored

Take the Devil's claw plant from Namibia for example. Used to treat rheumatism, it is gathered by the San tribe. According to Schippmann, around 10,000 San families depend on the plant for their economic survival. Even if it were easy to grow devil's claw as a crop, it would only be a limited number of commercial farmers in Namibia who could profit from this business. 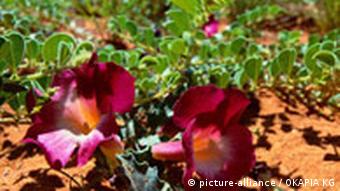 Nice to look at, and good against rheumatism -- Devil's claw

"The 10,000 families who have traditionally gathered the plant would be excluded from the trade," he said. It would be more effective, he said, to regulate the wild gathering locally to ensure that nature could replenish the amount picked.

Germany's leading medicinal plant supplier, Martin Bauer, can attest that such an approach works. In Namibia, the company teaches the devil's claw gatherers how to pick the plant in a sustainable way, and defines annual gathering zones in order to ensure that the stocks can regenerate themselves. The customers -- including Pharma Wernigerode, value this approach, says Helmut Burckhardt, head of quality control at the company.

Currently, the International Standard for Sustainable Wild Collection of Medicinal and Aromatic Plants, or ISSC-MAP, is being tested for feasibility by the WWF and the BfN in 10 projects, including one based in Bosnia, so that nature's bounty remains available for healing purposes in the future, too.

Germany's tobacco growers are in crisis mode. With EU subsidies due to stop in 2009, it's predicted the crop will die out. And given the current anti-smoking climate, there's not a lot of sympathy for the farmers. (03.09.2007)

Buying prescription and over-the-counter drugs is no easy task in Germany. Only pharmacies run by certified pharmacy owners may sell medicinal drugs, but the meds monopoly has been getting a run for its money of late. (29.11.2006)

Bonn scientists hit upon a discovery when mice wearing ear clips developed a rash. They dabbed a bit of a cannabis extract on the little ears, and the allergic reaction went away. (25.06.2007)

Do you use herbal remedies? Please include your name and country in your reply.