Media suppression, violence against journalists increases in Latin America | World | Breaking news and perspectives from around the globe | DW | 03.11.2010

Press freedom campaigners and journalism associations are increasingly concerned at what many describe as the dawning of a new era of media suppression in a number of Latin American countries. 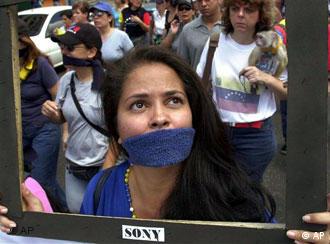 Latin America is experiencing a worrying return to censorship

While journalists no longer face the threats associated with the institutionalized death squads of the past, a new shadow is being cast over free speech and objective reporting in nations which have long since cast off the yoke of dictatorship.

Government-controlled censorship and the targeting of journalists by the state security apparatus may be part of many Latin American countries' dark history. But free speech is still in danger from powerful organized crime syndicates intent on silencing reporters and the disturbing creep of monopolized media industries under the auspices of sovereign leaders.

The country generating most concern is Mexico, where a total of 68 journalists and media workers have been killed and a further 11 abducted since 2000. Mexico has become one of the deadliest places in the world for journalists. The rising power of drug cartels and the Mexican government's violent crackdown on narcotics gangs has turned areas of the country into battlegrounds.

Journalists there working on stories about the drug war live in constant fear of being kidnapped, tortured and murdered by cartels desperate to silence the media's reporting on their activities and members. These alliances are eager to gain control of the airwaves. The international press freedom organization Reporters without Borders claims that drug gangs target journalists with impunity, as prosecutions relating to these crimes are very rarely completed. 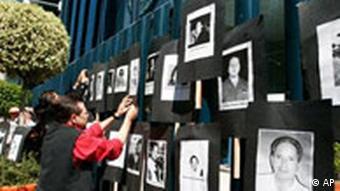 Journalists continue to die while reporting on Mexico's drug war

Reporters without Borders also claims that Mexico's Special Federal Attorney's Office for Combating Violence against the Media has failed to make much of an impression since its creation in 2006. The myriad departments dedicated to press freedom in the executive, legislative and judicial branches of government often cancel each other out through passivity or negligence.

"The Mexican government has done almost nothing to protect journalists," Benoit Hervieu, the Americas expert at Reporters Without Borders, told Deutsche Welle. "The Special Attorney charged with following up the investigations into crimes against journalists has been given over 500 files, and maybe one percent of them have been looked into. It is very hard to follow up investigations in Mexico."

The Mexican government has also been dogged by accusations that certain sectors of the state apparatus have been infiltrated by organized crime gangs. It is alleged that the authorities are also complicit, if not entirely responsible, for serious human rights violations including the suppression of free speech.

"Some government officials are involved in the suppression of the media and the violence committed against journalists, so investigations get hindered at an official level," Hervieu said. "It is very hard to pursue these cases. Plus bureaucracy is terrible in Mexico. It is one of the worst countries in Latin America for this."

Journalists in Mexico are living in such fear that there is a concern that the constant threat to their lives is leading to a form of self-censorship in an attempt to protect themselves. 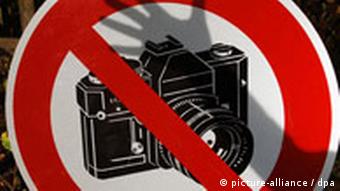 Only last week, El Diario, a newspaper in the Mexican border city of Ciudad Juárez, appealed directly in a front-page story to the drug cartels which have turned the city into a war zone and who have taken a number of journalists' lives. In the article, the paper asked for reporting and censorship guidelines.

"Gentlemen…please explain to us…what you would like us to publish or stop publishing," the statement read. "The last thing we want is for another one of our colleagues to fall victim to your gunshots."

"The cartels are obviously involved and responsible for attacks and media suppression but they also provide the government with a very convenient excuse," said Hervieu. "It is so easy for the government to blame the cartels. This is war, and in war confusion is high. It is therefore easy to say that the enemy is responsible. But in some of the most dangerous regions of Mexico, it is the police and the army which is the most feared."

While Mexico is considered the most dangerous place in Latin America for press freedom, it is not the only country in the region where journalists' lives are at risk. In Honduras, eight journalists have been killed so far this year by drug traffickers or in violent struggles with government forces in protests over land reform and the political situation in the country since the government was overthrown in 2009.

"In Honduras, the violence came after the coup in 2009 and the attacks on journalists came as revenge for dissent during the unrest," Hervieu said. "This political violence continues with no investigations. Honduras, along with Mexico and Colombia, is one of the most dangerous places for journalists in Latin America."

Elsewhere, the rise of government-backed media monopolies and the election of leaders keen to suppress dissenting voices are having detrimental effects on press freedom in countries such as Venezuela, Ecuador, Argentina and Bolivia. 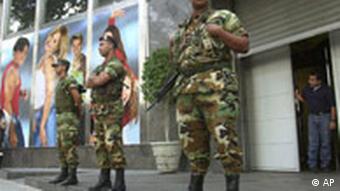 Chavez forced a number of media outlets to close down

Dictatorships may be a thing of the past in most Latin America countries, apart from Cuba, but leaders like Venezuelan President Hugo Chávez are exercising a level of control similar to that favored by the totalitarian regimes they were elected to replace. Chávez has closed down a television network, 32 radio stations and two local television channels allegedly because they criticized a political ally.

Rights groups accuse both President Rafael Correa of Ecuador and Argentina's leader Cristina Fernández of increasing their governments' grip on media institutions to an unhealthy degree.

Correa's regime now controls some 20 media companies in Ecuador and has brought in legislation which limits ownership of media outlets and what these outlets can broadcast in certain circumstances. This legislation was cited during a period of unrest in September when Correa ordered all television and radio stations to broadcast only government-supplied information. 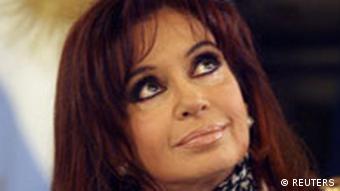 Fernández has her eye on increasing favorable coverage

Meanwhile in Argentina, Fernández is allegedly engaged in a campaign to break up the country's biggest media conglomerate, the Clarín Group, after it began broadcasting negative coverage of her and her recently deceased husband and former president Néstor Kirchner.

By applying pressure to some of the group's most influential contract partners, cancelling the company's license to provide Internet service, and sending tax officials to raid the group's headquarters, Fernández is determined to dismantle a powerful mouthpiece of dissent while increasing government advertising revenue in a bid to replace the Clarín Group's negative content with more government-friendly coverage.

"Clarín, owner of newspapers, radio stations, broadcast and cable television outlets, and an Internet service provider, has had an antagonistic relationship with Fernandez-Kirchner since a 2008 conflict with the farming sector over a tax raise," according to Carlos Lauría, senior program coordinator for the Americas at the Committee to Protect Journalists (CPJ). He said the government had accused Clarín and other private media of biased coverage.

"Journalists at Clarín and national newspaper La Nación believe the government is engaged in an intimidating campaign to silence critics," Lauría said.

Meanwhile both Bolivia and Nicaragua have passed laws which allow their governments to close media outlets deemed disruptive while allegedly prosecuting and imprisoning critical reporters on trumped up charges such as money laundering.

Media campaigners have a pessimistic view of the state of press freedom in Latin America and while there are efforts being made to turn things around, few have much hope of widespread change.

"What is needed is open debate," said Hervieu. "In Argentina and Uruguay, there was a debate among teachers and intellectuals about how the media could regain its full freedom. That's a start."

However, he said in Mexico, it would take a massive institutional reform with the help of the United States to bring about change.

"But the situation as a whole is desperate," Hervieu said.

In its 2010 press freedom index, Reporters Without Borders ranked Russia higher than in previous years. It's a decision that has surprised independent Russian newspaper 'Novaya Gazeta.' (27.10.2010)

Restrictions and crackdowns on press freedoms are not just the preserve of autocratic nations, according to watchdog organizations. A number of EU nations have joined the list of those experiencing an erosion of rights. (09.10.2009)