A deadly measles outbreak in the island nation has prompted the government to invoke emergency powers and make MMR vaccinations mandatory. The outbreak echos recent cases across the Pacific and Europe. 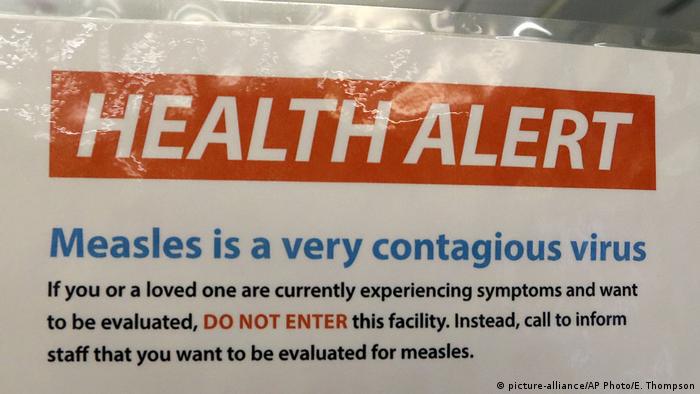 Five of the six people who have died were children, prompting authorities to make the measles vaccine compulsory.

The virus has also struck other neighboring island states including Tonga and Fiji, but Samoa is the worst affected with more than 700 cases reported from across the country.

All schools and kindergartens were shut Monday and children were banned from public gatherings. The island's only university also closed down.

The government announced that official plans for compulsory measles, mumps and rubella (MMR) immunizations would be published on Monday.

"MMR vaccinations for members of the public who have not yet received a vaccination injection is now a mandatory legal requirement for all of Samoa," it said.

No information was immediately available on how the vaccinations would be administered or whether those who were not immunized would face penalties.

Children are the most vulnerable to measles. The virus typically causes a rash and fever but can also lead to brain damage, blindness, and death.

Samoa's vaccination program was suspended temporarily in 2018 after two babies died shortly after being given a MMR vaccine. Follow-up investigations found the problem was not the vaccine itself but incorrect administration by nurses.

New Zealand, which is experiencing its own measles outbreak in its most densely populated region of Auckland, is expected  to send 12 nurses and 3,000 MMR doses this week to help Samoa's public health response to the disease.

Helen Petousis-Harris, an immunologist from the University of Auckland, said even though the virus was already widespread, a mass administration of vaccinations could limit the number of cases and reduce fatalities.

"In Samoa, the proportion of people who are immune to measles is very, very low, one of the lowest in the world," she told AFP.

Samoa's neighbor Tonga has already experienced 200 cases of the measles. Last week, Tonga's government announced state primary schools and kindergartens would be closed until the end of November.

A few days ago, Germany, following the footsteps of governments around the world, announced measles vaccinations would become mandatory as of March 2020.

Coronavirus digest: Japan to lift state of emergency for the first time since April 28.09.2021

Japan's medical experts and officials warned that lifting restrictions didn't mean they were out of the woods. Meanwhile, India has reported its smallest number of COVID cases since mid-March. Follow DW for the latest.

Olympics organizers have banned spectators in Tokyo after a state of emergency was declared. Australia's New South Wales recorded its highest caseload this year despite lockdown in Sydney. Follow DW for the latest.