World Cup sponsors McDonald's and Coca-Cola are accused of violating German laws on drinks packaging and recycling with their special edition cola bottle in the shape of a soccer ball. 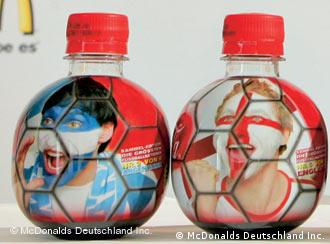 Given that McDonald's and Coca-Cola are two of the World Cup's top sponsors, you'd expect them to cooperate on a promotional gimmick to exploit the situation. Enter the "drink-ball," a soccer ball-shaped bottle of Coke that comes as part of every official World Cup 2006 menu at McDonald's.

The limited edition Coke ball-bottle is available only shortly before and during the World Cup tournament in Germany, Austria, Hungary and Poland. The idea, according to the two corporations, is that the round bottle will become a collector's item.

But therein lies the problem. Although the bottle is stamped with the word "Mehrwegflasche," indicating that it is a returnable bottle, McDonald's is not charging the customary deposit that is meant to ensure that the bottle will indeed be returned instead of tossed away after a single use. Nor, according to Germany's federal association of drinks retailers (GFGH), has a system for returning or recycling the unusual bottle been implemented, meaning that people who choose not to keep their "collector's item" have little choice but to throw it away. 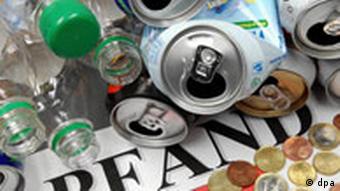 In Germany, consumers pay deposits on most drinks packaging

This deviation from Germany's regulations on recyclable and returnable packaging has prompted protest from both the GFGH and the environmental organization Deutsche Umwelthilfe.

"This is an unbelievably brazen attack on the returnable bottle system," said Deutsche Umwelthilfe's director, Jürgen Resch. "After the one-use lobby failed in their attempt to stop deposits being charged for non-returnable drinks packaging, we're now seeing this sort of subtle consumer deception, where one-use containers are being disguised as environmentally friendly returnable bottles."

Managing Director of the GFGH, Günther Guder said he feared the McDonald's drink-ball would prompt other retailers to skirt regulations on packaging deposits and launch similar "collector's edition" drinks.

McDonald's insists that its ball-shaped bottles are environmentally-friendly, because they can be returned to containers in its restaurants, and then recycled. And while no agreement has been made for the bottles to be recycled along with the nationwide Der Grüne Punkt (green point) system, Coca-Cola said that the plastic containers can be recycled at the plant in Genshagen, near Berlin, where the drinks are manufactured. 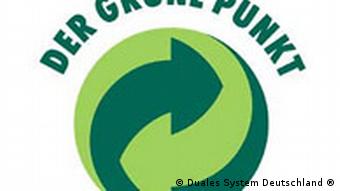 This symbol indicates when an item is recyclable

Deutsche Umwelthilfe, however, is convinced that McDonald's and Coca-Cola are breaking the law with their World Cup bottle. Unless the burger chain is willing to come to an agreement to either stop the advertising campaign or stop selling the bottles, the environmentalists say they are prepared to file a lawsuit with the district court in Munich, where McDonald's has its German headquarters.

The federal environment ministry in Berlin is on the side of the environmentalists. A ministry spokesperson said it was "totally absurd" to label the drink-balls as returnable packaging. And given the German government's goal of making the soccer tournament an especially environmentally-friendly event, it now looks as though McDonald's will face pressure from the highest level to re-think its World Cup-cola concept.

World Cup organizers have stressed that the 2006 tournament in Germany will be eco-friendly. Their Green Goal campaign is meant to cut greenhouse gas emissions produced during the event. (Oct. 19, 2005)

FIFA and Coca-Cola on Collision Course Over Plastic Bottles

Germany has done much to promote the coming World Cup's environmental aspects but its "Green Goal" initiative may be under threat by main sponsor Coca-Cola's plan to sell plastic bottles at the tournament. (Nov. 21, 2005)