Didn’t the German language make its international mark a long time ago with Goethe, Kant and Co.? Is there any room for modernity -- or global thinking? Those behind the "McDeutsch" project want to find out. 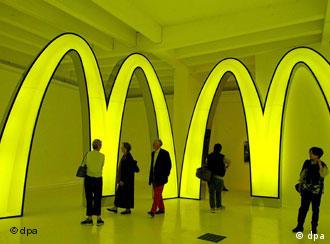 The McDonaldisation of German?

Anglicisms, spelling reform and falling tests scores in schools -- all of these bugbears come up when Germans discuss the significance of their language. However, the German language is not only under influence but, increasingly, it is also making an impact of its own beyond the German borders.

A few months ago, the online magazine Berliner Gazette spearheaded a new project they called McDeutsch, or "McGerman." Around 50 cultural experts based both in Germany and abroad hope to contribute to the national debate and create a global perspective. At a symposium in Berlin on Dec. 15, they'll delve more deeply into the matter.

"German is not only spoken in Germany, Austria and Switzerland," says Krystian Woznicki, the project's artistic director, who called the German language an export hit on a global level.

The linguistic process of globalization does not mean that the language imposes itself everywhere like McDonalds, as some say, but that "it spreads in different ways and at the same time also takes in the world in different ways," added Woznicki. 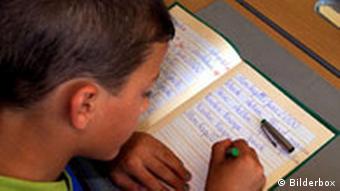 Children try to get their heads around the new spelling reforms

The language-globalization project has selected two experts from America and two from Africa.

The biggest German immigration waves took place in the US and Germany had its most significant colonies in Africa, said Woznicki, and the influences can still be felt today.

"For many people in the former German colonies, German is very highly-valued," said the director of Togo's Goethe Institute, Herwig Kempf. "Many Togolese or Cameroonians associate the German language with nostalgia for the past, for the good old German colonial times."

Actively, German tends to be used principally at universities by people who intend to study or work in Germany. 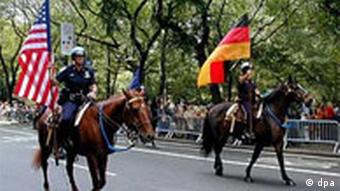 The Steuben-Parade - A German tradition in New York

As for the US, some 50 million Americans are of German origin. Only the English and Irish have more descendents in the US.

Although most Americans with German ancestors don't speak or understand German, many have kept a connection with their roots.

"We have many "heritage speakers," especially here in the Midwest -- that is, students whose families have German roots," says Yasemin Yildiz, junior professor at the University of Illinois.

The 37-year-old German scholar was born in Turkey and grew up in Bremen in northern Germany. For her, the globalization of a language simply means that it changes. Within Germany itself this is a process that many still perceive as worrying.

"The feeling is that the German language is being threatened and has to be rescued, instead of it being perceived as a living entity which changes and is dynamic," she says. 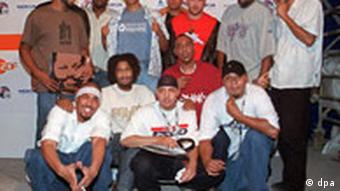 German hip-hop musicians lend modernity to the language of Goethe

But what does it mean for a language to pick up on influences?

"These are challenges which speakers have to set themselves," says Afro-German rapper and linguist Kofi Yakpo. He has often come across the prejudice that people who are not white can't master the German language.

But in Germany every sixth person is of immigrant origin, so German can no longer be linked with ethnic identity.

"The German language is transforming itself from a national symbol that provides an identity to the white, non-migrant majority into a pragmatic means of communication, and thus a modern definition of nation," says Yakpo.

German will never be as big of an export hit as English, but the project is not about comparing the two, rather about showing that other languages are also spreading past their national borders.

"It would be unfair and boring only to have English as an example of language globalization," said Woznicki.

To the romantic ear, the German language might sound cumbersome and perfunctory, yet beyond its tonal harshness, it is as efficient as its native speakers are reputed to be. But is that necessarily a good thing? (01.11.2006)

What do autobahn, fest, flugelhorn, angst and gesundheit all have in common? You guessed it: They all come from the language of Goethe, Thomas Mann and Rammstein. You know more German words than you think you do. (08.08.2006)

When it comes to learning languages, Britain is bottom of the class -- and Germany's outgoing ambassador to Britain thinks the younger generation will pay for its linguistic ineptitude. (13.12.2005)