The mayor of a small town that was the scene of a racist attack against eight Indians is coming under pressure to step down because of controversial comments he made to a right-wing newspaper. 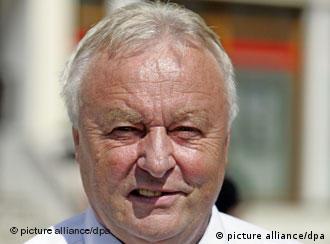 The Central Council of the Jews in Germany has called upon Gotthard Deuse to resign, following his interview in Thursday's online edition of Junge Freiheit.

Deuse told the newspaper that the recent attack in Mügeln, in the eastern German state of Saxony, was not racially motivated, adding that he was "proud to be German".

The Free Democrat afterwards told the dpa news agency that he had been unaware of the newspaper's political orientation and that his mention of national pride was in connection with the World Cup hosted by Germany last year. "I detest right-wing violence," he added.

Not the first controversial remark 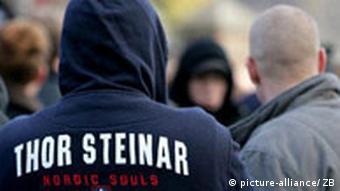 Deuse had already come under fire for earlier comments to the press about the incident in which the Indians were chased and attacked by a mob. Witnesses said a number had also shouted racist slogans, such as "Foreigners Out".

"Anyone can come out with such slogans from time to time," Deuse told Financial Times Germany. Initially, he had also denied the perpetrators were from Mügeln where he said there was no right-wing scene.

The General Secretary of Central Council of the Jews in Germany, Stephan Kramer, said in a television interview for Germany's N24: "The mayor is the mirror of the society that elected him." 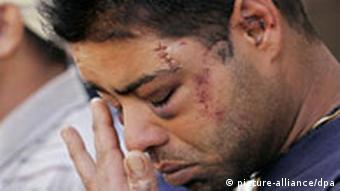 The faces of the battered Indians caused shame in Germany

He also referred to "democracy-free zones" in eastern Germany where the rule of law does not apply. Asked whether he would go for a walk at night in an eastern German town, he said: "I wouldn't do it. I'm not tired of living."

Sebastian Edathy (SPD), the chairman of the Bundestag's interior affairs committee, also said Deuse should consider resigning. He said that the situation in Mügeln was completely different than that portrayed by the mayor of the town. In Mügeln "there had been a pogrom-like atmosphere aimed at fellow citizens of foreign origin," he told the Mitteldeutsche Zeitung.

German transport minister Wolfgang Tiefensee (SPD) warned against any attempt to downplay what had gone on. "Looking away and playing things down are precisely the wrong approach," he told the Rheinische Post.

The minister, who is responsible for the reconstruction of eastern Germany, added; "Citizens and associations have to act courageously against right-wing extremist tendencies." 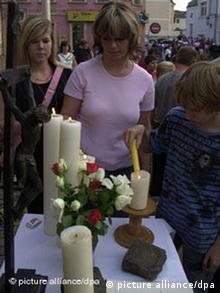 There has also been a protest in Mügeln against the attack

Tiefensee also said there was a greater problem with right-wing extremism in eastern Germany because there was not the same history of dealing with immigration and cultural diversity, but he also said the difficult labor market played a role in radicalizing society.

The Free Democrats have also distanced themselves from Deuse's comments. FDP General Secretary Dirk Niebel said acts of violence and xenophobic attitudes should not be relativized.

Legal proceedings have been launched against 12 suspects aged between 17 and 35, who are suspected of fomenting racial hatred and committing grievous bodily harm. The state prosecutor's office said, however, that there was no evidence that the attacks had been planned by right-wing extremists.

A recent spate of racially motivated incidents has led to some SPD members calling for proceedings to ban the far-right NPD party to be restarted.

Indians Wary of Visiting Germany After Attack on Compatriots

Following an attack on their compatriots in eastern Germany, worried Indian nationals are inundating the German embassy in Delhi with enquires about the possible risks associated with visiting the country. (30.08.2007)

Two right-wing extremists have confessed to beating up two Africans in the west of Germany, police said Monday as a new attack on an African was reported and investigations continued into three other racist assaults. (27.08.2007)